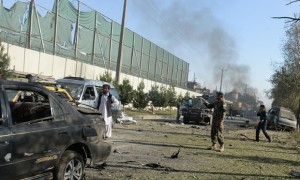 A large explosion hit Afghanistan’s capital Tuesday and sirens could be heard as rescuers raced to the scene in central Kabul near several government buildings.

There was no immediate word of any casualties.

The blast was strong enough to rattle windows several kilometers away in Kabul’s diplomatic district.