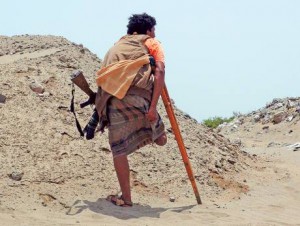 Health and security officials in Southern Yemen have said that dozens of people have been killed in a month by landmines planted by the retreating Al Houthis.

Al Khedher Laswer, the director of Aden’s office of ministry of health, told reporters that at least 100 people have been killed since Mid-July when they either walked or drove over landmines in Aden and neighbouring districts.

“Most of the dead are those who hastily returned home to Aden and other areas.” Laswer said. Al Houthis have recently suffered heavy loses in the south when their rival southern resistance and Saudi and UAE troops pushed them out of the strategic port city of Aden, Lahj, Dale’ and Abyan provinces. Fighting is now raging in the oil and gas rich province of Shabwa.

A security official from Aden, who requested anonymity because he was not authorised to brief the media, told reporters on Thursday that the defeated Al Houthis randomly planted landmines on main roads and farms to deter resistance advances. “Demining teams are facing a hard task as we don’t have maps for the mines,” the official said.

The official said security services in Aden defused 1,200 landmines from Aden airport in July and removed hundreds from places near electricity towers, main roads and water pipelines. “These are anti-personnel and anti-tank landmines and made in Russia and the West.”