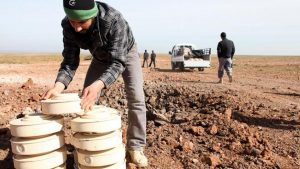 “Five soldiers of battalion 212 infantry were killed when several landmines exploded west of Darna during a reconnaissance operation following the withdrawal of militant group members.

“The withdrawal of the militants came after air force raids,” an officer said, adding several militants were also killed by the army,” said an official of the army’s operations centre.

The Libyan army has launched a military operation to take over Darna from the militants.

Since 2015, Darna has been besieged by the army, which demands that the Shura Council (consultative council) of the Mujahideen, a coalition of Islamist militias, to leave Darna.