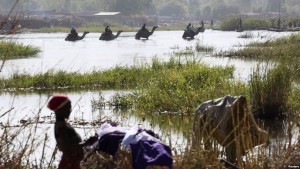 Chadian President Idriss Deby said that the multinational joint task force fighting the Boko Haram insurgency in Cameroon, Chad, Nigeria and Niger was finding it difficult to crush the terrorists, who are hiding in communities around the Lake Chad basin.

Deby, who was speaking at the end of a visit to Cameroon, said it was imperative for the population to help the military by denouncing suspected Boko Haram fighters.

Deby said the firepower of the Boko Haram terrorist group had been greatly reduced by the task force, causing the militant group to resort to cowardly moves such as taking people hostage for ransoms, stealing cattle and food, and deceiving people, especially women and young girls, to carry out suicide missions, just to give an impression it is still strong.

He said the Boko Haram of today was no longer the Boko Haram of 2014, when it could attack on a large scale. He said it became a shadow of itself when its fighters started hiding as ordinary people in communities to cause havoc.

The president congratulated people living around Lake Chad for creating self-defense groups to fight the terrorists. But he added that in order for the group to be eradicated, people should denounce suspects in their communities. He said that without peace, stability and security, central African countries would never attain their development objectives.

Deby said the 40 million inhabitants of the Lake Chad area, spread across Cameroon, Nigeria, Chad, Niger and Benin, were the most vulnerable to Boko Haram atrocities because that area has remained the terrorist group’s stronghold. He said that if the population did not collaborate by reporting suspects, poverty levels would continue to increase as many schools have remained closed and poverty reduction programs will become more difficult to execute.

The president said the military had been finding it difficult to organize raids in the area because the terrorists were using civilians as human shields.

The United Nations reports that the BokoHaram insurgency in Nigeria and its spillover to neighboring countries has caused the displacement of over 2.7 million people, generating multiple challenges, especially in the Lake Chad basin.