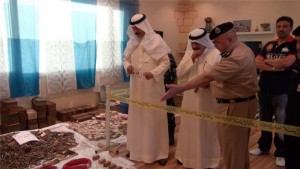 Kuwaiti authorities say they have arrested three members of a “terrorist” cell and seized a huge arms cache they say was smuggled from Iraq and hidden beneath houses near the border.

The Interior Ministry on Thursday said that the three Kuwaiti citizens have confessed to joining a group that was plotting to destabilise the country.

Majority Sunni Muslim Kuwait has been on alert since a suicide bomber blew himself up at a Shia mosque in the capital, Kuwait city, in late June, killing 27 people. The bombing was claimed by the Islamic State of Iraq and the Levant (ISIL) group.

A total of 19,000 kg of ammunition, 144 kg of explosives, 68 weapons, and 204 grenades were seized from three properties near the Iraqi border, the ministry said.

The ministry said the explosives were found in a farm in the al-Abdali area, and in two houses in undisclosed locations. The three men arrested were the owners of the houses, it said.

While the government did not specify what “terror” cell the arrested belonged to, Kuwait’s Arabic-language al-Anba newspaper said the cache had been smuggled from Iraq and stored by members of a cell linked to the Iranian-backed Shia Hezbollah group.

“This plot by elements linked to Hezbollah had been under surveillance for a long time,” the newspaper reported.

The arms cache found “is the largest in the country’s history,” the paper, quoting an unnamed source, said.

Gulf Arab governments are increasingly concerned that the recent accord between Tehran and Washington could embolden Iran to heighten support for paramilitary groups across the Middle East, including Hezbollah.

Kuwait says it is facing threats from both the growing Iranian spy networks and the spread of ISIL cells.

Since the June 26 suicide bombing, authorities have launched a crackdown on alleged ISIL members.

Last month, Kuwait said it had broken up a five-member cell of alleged ISIL fighters.