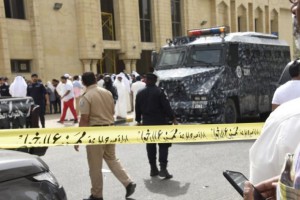 Authorities in Kuwait are tracking down details extracted from an arrested group of residents suspected of plotting and leading terror attacks against U.S. soldiers assigned to the country.

A collision between a truck driven by an Egyptian and a vehicle carrying three U.S. soldiers in Kuwait was a “terrorist attack,” not an accident as first thought, the U.S. embassy said.

“U.S. Embassy in Kuwait confirms that what at first appeared to be a routine traffic accident involving three deployed U.S. military personnel… was in fact an attempted terrorist attack,” the mission said in a statement posted on its website.

The statement said the attack took place on Thursday and that the U.S. soldiers escaped unhurt.

The soldiers also rescued the Egyptian driver when his truck caught fire, it said.

The Kuwaiti interior ministry said on Saturday that authorities arrested the Egyptian driver and found with him a hand-written note in which he had pledged allegiance to ISIS.

It also said that the driver, identified as Ibrahim Sulaiman, 28, also carried a belt and material suspected of being explosives.

Sulaiman told investigators that he supported the group and believed that its leader Abu Bakr Al Baghdadi should be the head of all Muslims.

He said that he had been using the Internet to follow the killing operations and the explosions carried out by the group, Kuwaiti daily Al Rai reported on Monday.

Sulaiman said that his attempts to learn how to make an explosive belt from the internet had failed as he did not have the required items.

Kuwaiti authorities announced in July they had dismantled three ISIS cells plotting attacks, including a suicide bombing against a Shi’ite mosque and against an interior ministry target.

An ISIS-linked suicide bomber had killed 26 worshippers in June last year when he blew himself up in a mosque.

The U.S. embassy said it was not aware of specific, credible threats against private U.S. citizens in Kuwait at this time.

But it warned that the attack serves as a reminder to maintain a high level of attentiveness, advising U.S. citizens to review their personal security plans and remain alert.