You are here: Home / MidEastGulf / Kuwait is buying a bunch of weapons to protect itself from the Islamic State 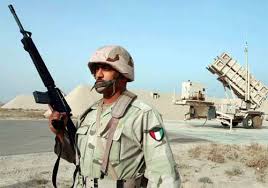 With the Islamic State creating chaos next door in Iraq, Kuwait is arming itself to the teeth. The tiny, oil-rich nation just signed a defense deal with France worth $2.8 billion.

French Prime Minister Manuel Valls and his Kuwaiti counterpart Sheikh Jaber Al-Mubarak Al-Hamad al-Sabah finalized the agreement on Wednesday in Paris. France will equip Kuwait with 24 Caracal helicopters, with an option for six more, as part of a contract worth $1.2 billion. The helicopter was designed for cargo transport and search and rescue missions, and has supported military operations in Afghanistan, Libya, and Mali.

The two countries have also inked two provisional agreements. One involves France upgrading and maintaining Kuwait’s small patrol warships, the other reportedly involves the sale of French-made all-terrain Sherpa trucks — light armored vehicles with 360-degree firepower that can carry up to four people and are designed to withstand landmines.

“Lately, Kuwait has started arming itself, mainly because it shares a border with Iraq, where the Islamic State is gaining traction and is now a viable threat,” explained Emma Soubrier, a a Gulf defense expert at the University of Auvergne in France. “When you consider the attacks that have been carried out against Kuwait, you can see why the country feels that it needs to arm itself.”

A bombing claimed by the Islamic State killed 27 people at the Shia Imam Sadiq Mosque in the capital Kuwait City in June. “We are in a state of war. […] There are other [terror] cells, and we will not wait for them to try their luck with us,” Interior Minister Sheikh Mohammad Al-Khaled Al-Sabah said after the attack.

France and Kuwait signed their first defense agreement in 1992 and renewed it in 2009. The deal outlines strategic and military cooperation between the two countries, including on equipment and training of troops. Today, a quarter of troops serving in Kuwait’s navy are trained in France.

In February 2015, France also clinched a deal to sell 24 Rafale fighter jets and a multipurpose naval frigate to Egypt, as part of a military weapons contract worth over $5.7 billion. Qatar followed suit in May, ordering 24 French-made Rafale jets.

“The United States are reluctant to sell to those countries that are today buying a lot of weapons from us,” said Jean-Vincent Brisset, a general in the French air force and a senior research fellow at the Institute for International and Strategic Relations. “And France is no longer conflicted — unlike Germany, for example — and is giving out unprecedented financial deals.”

Saudi Arabia, which has historically turned to the US for most of its weapons needs, inked a $11.3 billion deal with France in June. Soubrier described the deal as “strategic posturing,” aimed at “punishing the US for its policy — too close to Iran and not tough enough on Syria.”