You are here: Home / MidEastGulf / Kurds to lead In Raqqa dffensive despite US emphasis on Arab role 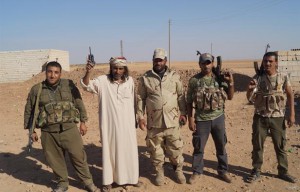 “We will fight for our land and honor,” said Arab rebel Abu Mohammed al-Ansari on the frontlines in Ayn al-Issa, 50 kilometers from the Raqqa capital. “We don’t want foreigners to come,” he added.

The Pentagon says it has only delivered 50 tons of ammunition to a Syrian Arab Coalition of 5,000 fighters. In reality, these forces and weapons will be controlled by the Kurdish People’s Protection Forces (YPG), one of the most effective armed groups on the ground in Syria.

“The reality is that we, as YPG, outnumber their forces. Their force is about 5,000 [Arab] fighters,” said `Haqi Kobani, the co-chair of the Syrian Democratic Forces. “But the numbers don’t matter, because we aim to have a democratic Syria.”

The Kurds say they will also receive a share of these weapons as part of the newly-formed Arab-Kurdish and Christian coalition, the Syrian Democratic Forces, announced last Sunday.

“All of them are going to be shared with the coordinated forces,” said Idris Nassan, a senior official in Kobani. “This plan was made in coordination with the US.” The US says it has trained the leaders of the new Arab coalition to take the lead in the Raqqa operation.

In reality, these small groups of Arab fighters are under complete control of the YPG, and there is a strong distrust among YPG fighters over their capabilities.

“I think the US officially wants the Syrian Arab allies of the YPG to take the lead in advancing further south on cities like Raqqa,” said Aymenn Jawad Al-Tamimi, a research fellow with the Middle East Forum. “But I think the US maybe hopes the Kurds will delegate the weapons appropriately. It shows who’s the actual lead player in the ground coalition — the YPG. Not its Arab rebel allies who are junior partners.”

Moreover, it’s unclear which FSA leaders were trained by the US-led coalition. “The last meeting we had with the Americans was one year ago, about Kobani,” said Abu Isa, a leading FSA commander from Raqqa. “We have a connection with the Syrian coalition, who have contacts with the Americans.”

Nevertheless, the US says its partnership with Arabs is important to defeat ISIS.

“Our partnership with the Syrian Arabs is so vital because the Syrian Arabs really have the ability to pressure Raqqa heavily,” Colonel Warren said. “Whether or not Kurdish fighters are willing to move that far south, frankly, is an unknown at this point. We have not seen Kurds operate in Arab territory very much.”

In reality, the YPG took a leading role in anti-ISIS offensives on Arab cities like Tal Abyad, Rabia, Tal Brak, often in coordination with local Arab allies, and will also play a key role in putting pressure on ISIS in Raqqa.

However, YPG fighters strongly distrust the capabilities of FSA fighters. The YPG was forced to retake Ayn al-Issa in July, after FSA fighters fled.

“The YPG control them, and they can’t do anything without them,” said YPG fighter Hikmet Osman, accusing them of fleeing in the face of the Islamic State.

But the FSA denies fleeing. “Thirteen ISIS members in civilian clothes infiltrated in Ayn al-Issa, and we attacked them and had to evacuate from the city to save the civilians,” said Abu Hamza, an FSA-fighter. “It wasn’t a withdrawal.”

There is a possibility that the US wants to avoid criticism by saying they delivered weapons to Syrian Arabs, instead of the YPG. Turkey fears these weapons might fall into the hands of the Kurdistan Workers Party (PKK), which they consider a terrorist organization. Turkish President Tayyip Erdogan said on Saturday that Turkey would not allow Kurds to take parts of northern Syria.

“They say the YPG is related to the PKK and that they are an enemy and terrorists,” said Kurdish official Idris Nassan. “But the international community says Kurdish fighters have nothing to do with terrorism.”

Already in the Arab-population city of Tal Abyad, the local Kurdish-led administration has a problem with ISIS infiltration — the group killed local Sheikh Ammar al-Darwish and one YPG fighter in mid-October.

“They killed the sheikh — they were on motorbikes, and after that stole a car and opened fire on the YPG,” senior defense official Ismet Sheikh Hassan said.

Following the assassination Kurdish security forces killed four ISIS militants and arrested two. Most of them were from a small village near Raqqa.

Western analysts say Arabs need to play a key role in the Raqqa operation — not just the Kurds who now dominate the Western-supported coalition of Arab and Kurdish rebels.

“Arab fighters will be the key to any future operation on the city of Raqqa, and currently there are not enough of them,” said Nick Heras, a Washington-based researcher at the Center for a New American Security.

“The challenge for the coalition is that a Kurdish-led, Kurdish-majority offensive to take the city might work, with a lot of US-led Coalition airstrikes, but it would also likely destroy the city and lead to heavy civilian casualties,” Heras said. “Long-term, it is doubtful that the Kurds could, or would want to, hold the city of Raqqa indefinitely to prevent the reemergence of ISIS, and a large, local Arab tribal force would be necessary.”

However, Bozan Khalil, a leading interior minister, says the Kurds will use local Arab forces to administrate the city. “According to our strategy of our administration, every community should police their own community,” he said. “We plan to make a national army, which will be the model for the rest of Syria,” he added.

Kurdish defense official Ismet Sheikh Hassan says it’s too early to talk about taking Raqqa. “We don’t have any clear plan yet for attacking Raqqa, but it’s clear to us we can take it,” he said. “ISIS is demoralized after they were defeated earlier in Tal Abyad, Ayn al-Issa, Suluk and Kobani.”

But Hassan says that the Syrian Democratic Forces need more training and weapons.

“After that, we will decide about the operation and we can talk about the possibility and time. It is too early to talk about taking Raqqa yet.”