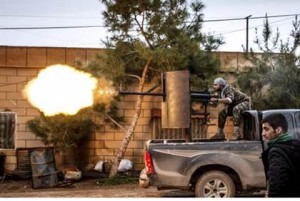 Fierce clashes continued through the day between ISIS and Kurdish forces.

Suluk, in the ISIS bastion province of Raqa in northern Syria, lies to the east of Tal Abyad, a key border town that is controlled by the jihadist group.

The town is a key target for the Kurds who want to free up the route between Kobane to the west and Qamishli, further east along the Turkish border.

With their advance into Suluk, YPG forces are now some 20 kilometres (12 miles) east of Tal Abyad, and they are also positioned around 10 kilometers to the west.

The YPG has been backed by US-led air strikes targeting ISIS positions in the area, he added.

The latest fighting in the area has prompted a wave of several thousand people to flee into neighboring Turkey, which is already hosting 1.8 million Syrians.