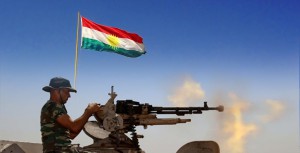 Kurdish forces attacked Islamic State in northern Iraq on Wednesday in the latest of several offensives aimed at driving the militants away from the oil-rich city of Kirkuk.

The assault began in the early morning to capture the al-Gurra heights to the west of Kirkuk in the direction of the Islamic State bastion of Hawijah, Kurdish military sources said.

The Kurds took full control of Kirkuk last summer when Iraqi soldiers abandoned their bases in and around the city as Islamic State militants overran around a third of the country.

The peshmerga have been widening a buffer around the city in a series of offensives, clearing more than 530 square kilometres over the past six months, according to the region’s security council.

Apart from the gains around Kirkuk, the frontline between peshmerga and Islamic State has hardly moved for months.

Islamic State has not been able to take ground from the peshmerga since the U.S.-led coalition started bombing the insurgents.

The Kurds already control most of the territory they claim as their own, and have little incentive to push further into predominantly Arab towns and villages, except where they pose a direct threat to their region.