The Afrin Canton said YPG forces would respond to any future Turkish bombardment, after artillery strikes Wednesday killed 6 in the Kurdish-populated enclave 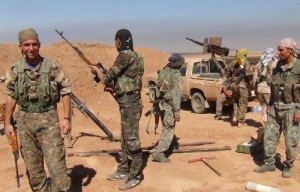 On Wednesday night, the government of the enclave issued astatement calling the Turkish army’s bombardment “a provocation and incitement… to ignite the fire of war.”

Starting at 6 p.m., Turkish troops opened up a barrage on the village of Sorke outside the border town of Rajo, killing five Kurdish People’s Protection Units (YPG) fighters as well as one member of the Asayesh internal security force, according to the ANHA news agency close to Kurdish ruling authorities in northern Syria.

The Syrian Observatory for Human Rights tracking developments in the war-torn country also reported the same casualty count, adding that 10 civilians were also injured in the artillery fire.

“We will respond appropriately [to Turkey] thanks to the presence of YPG units and Asayesh forces in case such attacks are repeated,” the Executive Council of the Afrin Canton warned.

The Kurdish governing body also issued a stern rebuke to the international coalition against ISIS, saying it holds it “responsible for this attack.”

“If they don’t take clear position and stance on this attack, we will consider it to have participated in it,” the Executive Council added in a broadside aimed squarely at the US, which backs the Kurdish-led Syrian Democratic Forces fighting ISIS further to the east in the country.

“We call upon international powers to reveal their stance concerning the [Turkish] attack and place pressure on Turkey to stop its attacks on Syrian territory,” it also said.

A cautious calm settled over Sorke Thursday morning, however ANHA reported that Turkish tanks and APCs were continuing to “mass” across the Afrin border.