You are here: Home / MidEastGulf / Kurds fighting in Turkey: more than a dozen killed in Cizre amid military curfew 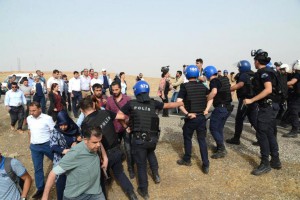 Peoples’ Democratic Party leader Selahattin Demirtaş (top left, white shirt) and his delegation are blocked by Turkish police on their march to the city of Cizre Thursday. He has been leading fellow deputies and supporters on a march to Cizre to end the curfew and draw attention to the plight of its 120,000 residents.

As many as 32 Kurdish militants and at least one civilian have been killed in a southeastern Turkish city that has been under a 24-hour military curfew since last week, according to multiple reports Thursday. The death toll in the Turkish city of Cizre that was provided by Turkish Interior Minister Selami Altınok was disputed by the pro-Kurdish People’s Democratic Party, or HDP, which said 21 civilians have been killed there in that same period, reported BGN News, an English-language news site based in Turkey.

The city has been under a curfew for seven days, and while many residents have been reporting deaths, an official tally has proven elusive because nobody is being allowed in, according to a tweet from one reporter on the ground who quoted Prime Minister Ahmet Davutoğlu as claiming there has been “not one civilian death” in Cizre. The city has been under curfew because of fighting between the Turkish army and militants from the Kurdistan Workers Party, or PKK, which resumed in July after a ceasefire broke down following a deadly attack attributed to the Islamic State militant group.

#CizreUnderAttack …army open fire even against the people marching to #cizire with white flags pic.twitter.com/9z4aO1byiy

The fighting combined with the curfew has led to a social media movement manifesting itself as a Twitter hashtag, #CizreUnderAttack.

Pro-Kurdish politicians set off Thursday on a 55-mile march to Cizre to demonstrate against the curfew, according to the Guardian. Previous attempts to travel to the city were thwarted by security, which forced the group to instead stage a sitdown protest after riot police would not let them pass.

Communication with the locals is difficult, many times impossible as there is no electricity, no internet, no GSM connection.

HDP co-chair Demirtas & 40 MPs’ march to Cizre in the 2nd day, police however do not let them to approach the city. pic.twitter.com/kk5seO1cYp 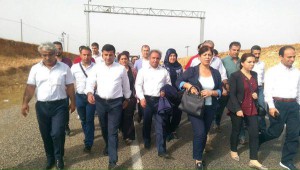 Kurdish politician Leyla Zana, who is banned from entering Cizre, has gone on a hunger strike and pleaded for a ceasefire, according to a local reporter.

An 80-year-old man who was not permitted to leave Cizre to seek medical attention and a 53-year-old mother of seven who was hit by a stray bullet were among those reported dead Wednesday, according to local ANHA news agency.

HDP leader Selahattin Demirtaş has been a staunch advocate for the city of 120,000 people. “The government should not be allowed to get away with what is being done today in Cizre,” he told local TV outlet IMC TV, according to the Guardian. He said he would “carry Cizre’s voice to the world.”