You are here: Home / MidEastGulf / Kurds emerge as key force in fight against Islamic State ‘Caliphate’ 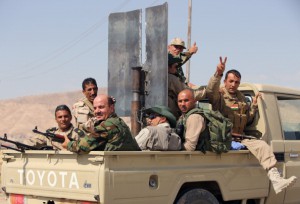 Kurdish fighters in Iraq and Syria have emerged as some of the most effective forces battling the Islamic State (IS) jihadist group in the year since IS declared a cross-border “caliphate”.

Iraq’s Kurds defended their autonomous region, gained control of a swathe of long-disputed territory during IS’s sweeping offensive and retook areas they lost to the jihadists, coming out better than most in a war with no real winners.

In neighbouring Syria, Kurdish forces defended the town of Kobane against IS in a months-long battle, retook the key hub of Tal Abyad on the Turkish border this month and fought the jihadists in other areas.

International air support played a key role in the success of Kurdish forces in both countries.

The Kurds; who are estimated to number 10-15 per cent of Syria’s population and 15-20 per cent of Iraq’s, are fighting a common enemy, but they are distinct communities with their own agendas.

And while they have had successes, the Kurds have also paid a heavy price in lost lives, destroyed homes and economic troubles in both countries.

Thousands of Iraqi federal security personnel fled a brutally effective IS offensive last June, clearing the way for the Kurds to gain or solidify control over territory claimed by both them and Baghdad.

But IS drove Kurdish peshmerga forces back toward their regional capital Arbil in August in an offensive that might have ended in disaster if the US had not begun bombing the jihadists.

We Will Not Leave

Backed by air support from a US-led coalition, Iraqi Kurds were able to retake territory lost to the jihadists and defend against IS attacks elsewhere.

After fighting for these areas, the Kurdish region is especially unlikely to relinquish them, and while the federal government’s position is too weak to dispute this now, analysts say it will be a problem down the road.

“We made sacrifices and gave blood, and therefore we will not leave them and will defend these areas… until the end of this war,” said Mustafa Qader, the Kurdish regional minister responsible for the peshmerga forces.

“I believe that the Kurdistan region will not easily surrender these areas to the Iraqi government,” Qader said, though he added: “It is possible that an agreement will be reached.”

In Syria, the Kurds carved out autonomous areas in the country’s northeast in the chaos of the country’s civil war after Syrian government troops withdrew.

The Kurdish People’s Protection Units (YPG) and allied forces, with US-led air support, defended Kobane for months against jihadists trying to seize the city on the Turkish border, in a significant psychological victory for anti-IS forces.

The YPG and Syrian rebels also retook the town of Tal Abyad from IS, a major blow for the jihadists, who used it as a gateway to and from Turkey.

“Kurds are arguably the most effective fighting force against IS in Syria. They are well-organised, disciplined and are big believers in their cause,” analyst Sirwan Kajjo said.

“They have managed to defeat the Islamic State in several areas. But the US air strikes also play a big role in this,” said Wladimir van Wilgenburg, an analyst at the Jamestown Foundation.

But the price has been high.

“The Kurds have suffered immensely under IS threats. During the Kobane crisis, thousands of Kurds fled to Turkey,” said Kajjo.

“Despite the liberation of their city, the vast majority of them have not been able to return to their homes because they’re totally destroyed,” he said.

And in other Kurdish-controlled areas in Syria, “the economic conditions have been very tough. Prices are skyrocketing and goods are increasingly becoming unavailable.”

In Iraq, the Kurdish region has had to cope with a huge number of people fleeing violence for territory it controls — over 1.2 million from June last year to the beginning of this month, according to the International Organisation for Migration.

The Kurdish region’s image as a safe haven from the violence plaguing other parts of Iraq also took a hit from bombings in Arbil and IS’s presence near Kurdish territory, said Nathaniel Rabkin, the managing editor of the Inside Iraqi Politics newsletter.

And the cost of the war, exacerbated by a vastly expanded frontier for the peshmerga to defend, has added strain to an economy already hit by long-running disputes with Baghdad over finances and oil.

“The economic crisis… caused major problems and revealed how vulnerable they are to the vagaries of regional security and international oil prices,” said Zaid al-Ali, author of “The Struggle For Iraq’s Future”.

Ultimately, “no one is coming out very well in this conflict,” Ali said.