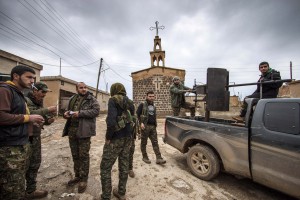 Kurdish militia advanced Sunday to the gates of a strategic jihadist-held town on Syria’s northern border with Turkey amid fierce fighting with the Islamic State group, a local commander told AFP.

“The clashes are ongoing now on the eastern edges of Tel Abyad, 50 metres (yards) from the town. We are fighting for control of the first checkpoint,” said Hussein Khojer, a commander with the Kurdish People’s Protection Units (YPG).

Tel Abyad lies in Syrian Kurdistan region on the Syrian-Turkish border and is used by IS as a gateway from Turkey into its bastion province of Raqa.

“This advance comes after three days of very fierce fighting in the area,” Khojer said, adding that several Syrian rebel factions were fighting alongside the YPG.

The Syrian Observatory for Human Rights confirmed the advance, telling AFP that the YPG had reached the town’s southeastern edges.

“They have reached the southeastern entrance of Tel Abyad, but they have not entered the town yet,” said Observatory head Rami Abdel Rahman.

Both Khojer and Abdel Rahman said that IS fighters had attempted to halt the Kurdish offensive by blowing up two bridges just outside Tel Abyad.

“IS blew up the al-Jallab bridge southeast of Tel Abyad, but the water isn’t deep — so the Kurdish fighters just waded across,” Abdel Rahman said.

He said anti-IS forces had yet to push further southwest of the town.
Kurdish militia have been backed by air strikes by the US-led coalition fighting IS in Iraq and Syria.