You are here: Home / MidEastGulf / Kurds capture ISIS base north of Syria’s Raqqa 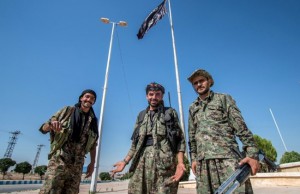 Kurdish fighters and their allies have captured an ISIS military base in northern Syria.

Bali and the Observatory said Tuesday that YPG fighters and their allies have entered parts of the nearby town of Ein Eissa, the last major residential area north of the extremists’ de facto capital of Raqqa.

Last week, YPG fighters and allied rebel factions captured the Syrian town of Tal Abyad on the Turkish border, in a major setback for ISIS.