You are here: Home / MidEastGulf / Kurds advance against Islamic State in northeastern Syria 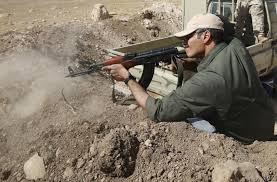 Kurdish YPG fighters and allied militia have encircled ISIS militants in a dozen villages near the town of Tel Tamr in Hasaka province. The region is important in the battle against ISIS because it borders land controlled by the jihadis in Iraq.

The Kurdish YPG appear to be trying to drive ISIS from a stronghold in the mountainous Jabal Abdul Aziz area to the southwest of Tel Tamr, said Rami Abdulrahman, who runs the Syrian Observatory for Human Rights monitoring group.

The U.S.-led alliance bombing ISIS in Syria has been coordinating its air strikes in Hasaka with the YPG, after successfully joining forces with the Kurds to drive the jihadis from Kobani, or Ayn al-Arab, in January.

The Kurdish official, Nasir Haj Mansour, said around 80 ISIS fighters were killed in an ambush when they tried to flee the Tel Tamr area for Jabal Abdul Aziz earlier this week. Dozens more were killed in airstrikes.

“The confirmed number of [ISIS] dead is between 170 and 200,” said Mansour, speaking by telephone from Syria.

Around 100 ISIS fighters were still encircled in the villages near Tel Tamr, he added.

Abdulrahman confirmed the YPG had effectively encircled ISIS fighters in the villages near Tel Tamr. “The YPG are getting ready to launch attack on Jabal Abdul Aziz,” he said.

ISIS is still believed to be holding some 200 Assyrian Christians abducted in February from villages near Tel Tamr.

The U.S.-led Combined Joint Task Force said Tuesday it had carried out seven airstrikes since early Monday in Hasaka that had destroyed vehicles, fighting positions and a shipping container.