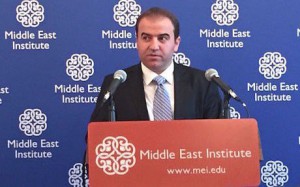 The head of Kurdistan Democratic Party (KDP) Foreign Relations, Hemen Hawrani, told a panel in Washington Wednesday that the process of Kurdistan’s independence is ongoing and that Erbil is seeking an “amicable divorce” from Baghdad, which he argued would contribute to the stability in the region.

“This is [independence] is a process that is happening and it’s going to happen and the referendum we are going to hold very soon, I mean less than two years, is for all Iraqi Kurdistan citizens,“ said Hawrami in a panel at the Middle East Institute in Washington. “Frankly speaking, Iraq is broken.”

Hawrami added that Kurds will talk to Baghdad for a peaceful separation, arguing that the current system of governance in the Middle East has failed and a new system based on the socio-ethnic realities should be premise for a new map of the region.

“The first capital we are going to talk with is Baghdad. Baghdad is important for us. We want to do it in an amicable way. We want to add to stability of the area and Kurdistan is the anchor of stability,” said Hawrami. “It’s time for the world to realize that a failed system needs a review.”

On the participation of Kurds in the current Iraqi government, Hawrami said that there is representation, but no power-sharing in Baghdad, citing as example the exclusive Shiite control of Iraq’s Defense Ministry with marginal Kurdish and Sunni presence.

On the issue of energy and budgetary disputes between Erbil and Baghdad, Hawrami said that the Kurds fulfilled their obligation of exporting 550K barrels of oil per day for several months, but that Baghdad didn’t send Kurdistan Region’s 17 percent budget share.

“Baghdad claims they don’t have cash, but they have cash for PMU [Shiite militias].” Each member of PMU gets $800. There is money for them, but not for Peshmerga,” he said.

The Kurdish official said that the Kurdistan Region was on the path to financial independence to helps its citizens and more than 1.4 million refugees, and he urged Baghdad not to interfere in these efforts.

Hawrami rejected any notion that Kurds were exploiting the war against ISIS for territorial expansion, saying, “We have not done territorial expansion. It was Maliki’s army, as a friend of mine described, that peacefully handed over to ISIS. Maliki’s army surrendered to ISIS and they withdraw from all those areas, if we were not in those areas, ISIS would have taken Kirkuk and other areas.”

“If we leave those areas, who will going to fill in? ISIS?” he asked.

Hawrami added that the Kurds were not fighting ISIS to promote their independence project. “Fighting ISIS does not mean that Kurdistan fights ISIS in order to get independence. It’s two different issues.”

The KDP diplomat also warned that defeating ISIS would not mean the end of terrorism in the region.

Hawrami argued that Iraq’s Sunni areas suffered major setbacks due to lack of leadership, adding that the Sunni community is now concerned about the post-ISIS era.

“The question and concerns Sunnis have is between [Shiite] militias and ISIS, which one is better?” said Hawrami. “The best thing is to give them assurances that whenever your area is liberated, you govern and protect your areas.”

Hawrami said that Erbil could help the Sunnis for a better future once Kurdistan breaks away from Iraq. “The most important thing for us is to act for stability in the area.”

The KDP official also encouraged Washington to pursue an independent policy towards the Kurds, and in the meantime recognize the actual drawing of borders on the ground by Iraq’s different communities.

“United States is an indispensable ally for us and we are not going to do anything without consultation,” he said. “But for the United States, the fact is Iraq on ground is now divided. Iraq is not fragmented. So any policy to deny this reality and this fragmented Iraq is not helping the planning for more stability in the area.”