You are here: Home / MidEastGulf / Kurdistan Referendum has had no impact on fight against Islamic State 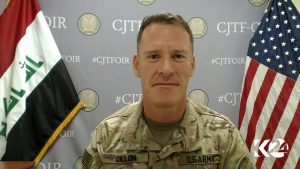 The Peshmerga continue to be involved in the fight against the Islamic State (IS), and they continue their coordination with the Iraqi Security Forces (ISF) in battling the terrorist organization, like reported by kurdistan24.net.

Col. Ryan Dillon, Spokesman for Operation Inherent Resolve (OIR), described to the Pentagon press corps on Thursday the ongoing engagement of Kurdish forces in the anti-IS fight despite the controversies raised by the Kurdistan independence referendum and the reaction of others, most notably Baghdad, to that vote.

“The Kurdish independence referendum occurred this week,” Dillon, speaking via teleconference, noted in his opening remarks. “While there’s been much coverage of this event, the coalition and the ISF have stayed focused on operations to defeat (IS.)”

Hawija, some 45 kilometers west of Kirkuk, is the center of the current fighting.

Dillon explained that the role the Peshmerga are playing now in Hawija is similar to the part they played in the liberation of Tal Afar a month ago.

“They did not play a role in the attacking force in Tal Afar,” he explained. “However, they did play a role—a vital role” in stopping IS members who were “attempting to flee north” from the city.

Responding to a question from Kurdistan 24, Dillon affirmed that coordination between the ISF and Peshmerga continues.

“There was talk about movement of Iraqi Security Forces between the Kurdistan defensive line, so they can maneuver and get into positions to attack Hawija,” said the Baghdad-based Spokesman. “As far as I know, that coordination continues.”

He explained that the battle to liberate Hawija had gone more quickly than expected. The ISF had estimated that the first phase would take one week but was completed within 72 hours.

The issue of the referendum was a political matter, Dillon stressed, as he cited the efforts of Special Presidential Envoy for the Global Coalition to Counter ISIS, Brett McGurk, to dissuade the Kurdistan Regional Government from holding the vote—efforts which ultimately failed.

In contrast, the coalition was “focused on the military efforts” to defeat IS, Dillon said. There haven’t been “any kind of conversations” among military people, “trying to talk about the referendum,” at least as far as he knew.

The Spokesman described the effect of the referendum in terms of a diffusion of the focus on IS. Beyond that, it had had no impact on the anti-IS fight at the military level.

“Prior to the referendum, there were no questions about where the focus was,” Dillon explained. Now, however, “There is a lot of posturing and a lot of things that have been said about what could or may happen.”

On Thursday, former US Ambassador to Iraq, Ryan Crocker, who worked with Gen. David Petraeus during the US “surge” there, suggested that Washington bore some responsibility for the situation.

Crocker told CNN that he thought it had been “a mistake” for the US to have taken such a strong stand against the referendum and that the US stance “may have emboldened Baghdad to take a harsher posture” toward the referendum “than they otherwise would [have].”