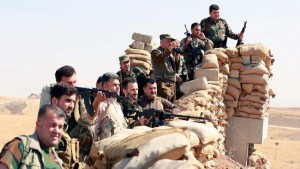 The Peshmerga fighters gained control of the villages after launching an attack on three fronts, an official said.

The villages include Kurdish, Arab and Christian ones, Peshmerga spokesman Brigadier Halgurd Hikmat said. He added that fierce fighting between the two sides is ongoing.

Peshmerga forces also took control of the main roads near al-Hamdaniya district and advanced about 5 kilometres towards the Assyrian town of Bartella, Hikmat said.

Peshmerga spokesman Jabar al-Yawar told dpa that the operation started at 5 am (0200 GMT). “Our forces are constantly advancing … I can tell you now that we are advancing to reach our goals,” he said.

Prime Minister Haider al-Abadi had announced early Monday that the long-awaited operation to free Mosul from the Islamic State extremist organization has begun.

Mosul, which is located in Nineveh province, is the largest city controlled by the Sunni extremist group, with a population of more than 2 million before the conflict.

The battle is expected to be a decisive moment in Iraq’s fight against Islamic State, which al-Abadi has vowed will be driven out of the country this year.

Islamic State overran Mosul in mid-2014 at the beginning of a lightning offensive that saw it seize swathes of Sunni Arab northern and western Iraq as Iraqi army and police units collapsed in the face of its onslaught.