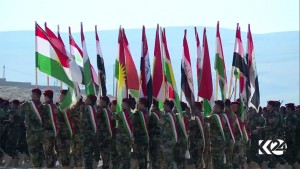 In a special ceremony on Tuesday, over 900 Arab Peshmerga soldiers finished military training to fight against the so-called Islamic State (IS) in the southwestern Kurdistan Region, like reported by kurdistan24.net.

Following the President of the Kurdistan Region Masoud Barzani’s decision to form a special brigade for ethnic Arab Peshmerga volunteers, 950 Arab soldiers completed military courses at the Khinis base located in Duhok Province.

In a statement presented during the ceremony, the Commander-in-Chief of the elite Kurdish Zeravani forces Aziz Waisi praised President Barzani’s decision to form the brigade.

The brigade was formed after Arab tribe leaders in the Zumar and Rabi’a areas in north and northwest Mosul asked the President to create a distinctive Peshmerga force for Arab volunteers.

The graduated units are expected to be deployed in the Zumar and Rabi’a towns to protect the area from the threat of IS, one of the brigade commanders told Kurdistan24.

According to a Kurdistan24 correspondent in Duhok, another unit of Arab Peshmerga, containing nearly 1,000 volunteers, will begin military training soon.

Besides Arabs, the Peshmerga Ministry has previously formed brigades for Kurdish Yezidis (Ezidis), Christians, and Kurdish Shabaks to protect their areas from the threat of extremist groups.