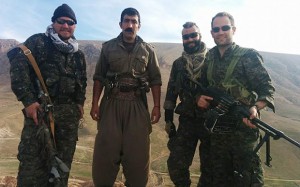 A Kurdish militia leading an attack on Islamic State strongholds in Syria so far has no plan to extend the assault to the group’s de facto capital of Raqqa city, and such an advance should be led by Syrian rebels, a Kurdish leader said on Wednesday.

The comments by Saleh Moslem, leader of the Democratic Union Party (PYD), indicated there is no imminent offensive on Raqqa city by the Kurdish-led forces that have made swift gains against the jihadists backed by U.S.-led air strikes.

Backed by smaller Syrian rebel groups, the Kurdish YPG militia moved to within 50 km (30 miles) of Raqqa city on Tuesday with the capture of the town of Ain Issa in northern Syria, backed by U.S.-led air strikes.

Driven from areas north of Raqqa, Islamic State was reported to be reinforcing its positions near the city on Wednesday, digging trenches and bringing in truck loads of weapons.

But Moslem, whose party holds sway in Syria’s Kurdish areas, said it was up to rebel groups fighting with the YPG to decide on any advance on Raqqa itself.

“We spoke to the YPG leadership. They don’t have a plan towards Raqqa so far. This (decision) is linked to the revolutionary forces in Raqqa,” Moslem said in a telephone interview.

“When they are ready to free Raqqa, to liberate it, perhaps the YPG will decide to support them. But the YPG have not made a decision in this regard so far,” he said.

The YPG has emerged as the only notable partner on the ground to date for the U.S.-led alliance bombing Islamic State in Syria, and has fought several successful campaigns against the jihadists with air support.

Moslem’s comments indicate the well-organised YPG’s reluctance to venture far beyond Kurdish areas to attack Islamic State in parts of Syria where Arabs are in the majority: the YPG’s stated aim is to defend the Kurdish areas.

The Obama administration has touted Kurdish-led advances as a model for the U.S.-backed effort to roll back the jihadist group. A U.S. plan to train and equip the “moderate” opposition to fight the jihadists is stumbling.

The Syrian Observatory for Human Rights, which monitors the war, said Islamic State had called in reinforcements of 100 truckload of weapons and ammunition which it was believed to be deploying at a military base on the Raqqa outskirts.

YPG spokesman Redur Xelil told Reuters the Kurds had received information that Islamic State had “begun digging trenches in the vicinity of Raqqa to improve their defences”.

Some Syrian opposition activists have accused the YPG of driving Arabs and Turkmen from areas taken over in the latest advance – an accusation of ethnic cleansing echoed by the Turkish government but vehemently denied by the YPG.

The Observatory says it has not recorded any systematic abuse of human rights by the advancing YPG forces, though there have been some individual cases.

The capture of Tel Abyad linked up two of the autonomous Kurdish zones in northern Syria, fuelling Turkish concerns about Kurdish separatism in Syria that could encourage its own Kurdish minority.

The Syrian Kurds say they do not want a separate state, but that their model of regional autonomy should be the basis for an eventual solution to the Syria war.

More than 23,000 people fled into Turkey from Syria as the Kurdish-led advance approach Tel Abyad, and thousands more have reportedly fled to Raqqa city from the advancing YPG-led forces.

Moslem said claims of ethnic cleansing aimed at igniting Arab-Kurdish strife and would not succeed, adding that returning the displaced to their homes was a priority for the YPG.