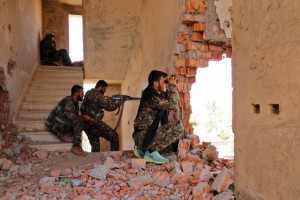 The Kurdish People’s Protection Units (YPG) and its allies in Syria are understood to have made plans to seize a stretch of the Syrian-Turkish border currently held by Islamic State (Isis) fighters. The offensive will deprive Daesh (IS) of a pivotal logistical route for supplies and foreign recruits, but may also have the potential to offend Turkish authorities.

An unnamed YPG source confirmed to Kurdish news website Xeber24 that although there was no fixed date, it may be close to 29 January. The plan, according to a Reuters report, includes crossing the Euphrates to attack the IS-held towns of Jarablus and Manbij, in addition to Azaz, which is occupied by other insurgent groups.

Turkey, however, has said it will not allow the Syrian Kurds to move west of the Euphrates. Ankara has always feared that further expansion by the YPG can fuel separatist sentiments among its own Kurdish minority. It also views the Syrian Kurdish Democratic Union party (PYD), the parent party of the YPG, as a terrorist group due to its affiliation with Turkish Kurdish militants.

The Kurds and their allies who already control Syria’s north east Turkish frontier have been a vital partner in the US-led air campaign against IS. They are also a major component of an alliance — Syria Democratic Forces — that includes Arab and other armed groups.

The development comes at a time when the third round of Geneva talks on Syria is facing difficulty in getting Syria’s warring factions together for a UN-brokered peace deal. Many of the parties involved consider the presence of others to be a stumbling block. Turkey announced that it strongly opposes participation by Kurdish groups.

“We are categorically against the YPG and PYD sitting at the table,” declared Turkish Prime Minister Ahmet Davutoglu. Turkish Foreign Minister Mevlut Cavusoglu also described the PYD as a “terrorist group” with no place at in negotiations.

Ankara accuses the PYD/YPG of being offshoots of the Kurdish rebel group PKK, which Turkish forces are currently battling both domestically and by air in Iraq. The Turkish government also resents growing US and Russian support for the PYD.

Organisers of the talks confirmed this week the Kurds were not invited, a move that has upset many Kurds around the world. Peace negotiations as a whole over Syria have been undermined by disputes over who should represent the opposition.