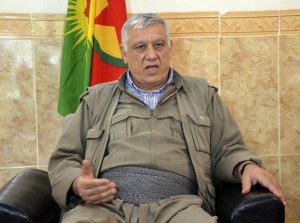 Cemil Bayik, co-founder and a senior leader of the Kurdistan Workers’ Party (PKK), accused Turkey of colluding with the Islamic State group by attacking Kurdish fighters in Iraq and Syria. In an interview with the BBC, Bayik alleged that Turkish President Recep Tayyip Erdogan is “behind ISIS massacres.”

“The Turkish claim they are fighting Islamic State … but in fact they are fighting the PKK,” Bayik told the BBC. “[Erdogan’s] aim is to stop the Kurdish advance against them, thus advancing his aim of Turkishness in Turkey.” He also added that negotiations between the PKK and the Turkish government were the “only choice” if long-lasting peace is to be attained.

PKK, which was formed in the late 1970s, launched an armed struggle against the Turkish government in 1984 — demanding greater autonomy for Kurds living in the country. Since then, clashes between the two sides have led to the deaths of over 40,000 people.

A two-year-long détente between the PKK and Turkish government — announced in March 2013 — ended last month after 32 people were killed in an ISIS suicide attack in the Kurdish-dominated Turkish border town of Suruc. Two days later, rebels from the PKK killed two Turkish policemen whom they accused of collaborating with ISIS.

Turkish airstrikes against the PKK, which began on July 24, are still ongoing, even as Erdogan’s government announced its intention to launch a “comprehensive battle” against ISIS in Iraq and Syria. However, while Turkey has carried out limited airstrikes against ISIS in northern Syria, it has shown more interest in targeting areas in northern Iraq held by the PKK — a move that has been criticized by many as being short-sighted.

According to recent reports, nearly 400 Kurdish fighters in northern Iraq have been killed in airstrikes launched by the Turkish military.

“The government in Ankara would prefer to have ISIS as Turkey’s neighbor,” Figen Yuksekdag, a leader of Turkey’s pro-Kurdish Peoples’ Democratic Party, told Deutsche Welle Sunday. “The Turkish government and the IS have a strategic and ideological affinity for each other. That is why the current airstrikes have been launched against the Kurdish movement and not the ISIS.”

Kurdish fighters, including those from the PKK and its Syrian affiliates, have been battling ISIS on the ground since June last year and have made significant advances in the region. Earlier this year, Kurdish YPG militias — the armed wing of Syria’s Kurdish Democratic Union Party, which is an affiliate of the PKK — pushed ISIS out of the Syrian border town of Kobani.

However, the ongoing conflict between the PKK and Turkey is likely to hinder U.S.-led efforts to eliminate ISIS, as the U.S. depends heavily on Syrian Kurdish fighters in the region. The U.S. — which counts Turkey as a key regional ally in its fight against ISIS — is providing air support to YPG fighters in Syria, even as the White House maintains that the PKK is a “terrorist” organization.