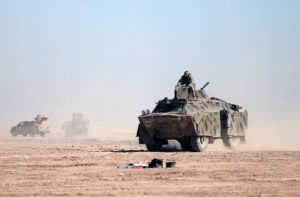 Syrian Coalition-led forces (of which Kurdish units form a key part) have ejected Islamic State militants from a key stronghold on the eastern shore of the Euphrates River in the province of Deir Ezzor, like reported by almasdarnews.com.

US-backed forces operating in eastern Syria captured the town of Gharanij (also spelt Khara’ij) from ISIS. The settlement, laced with defenses to the point of being a fortress on the Euphrates, served as a key stronghold for the terrorist group.

The battle to capture Gharanij was not easy as Syrian pro-Coalition fighters and Islamic State terrorists engaged in clashes for well over a week.

Initially, US-led Arab and Kurdish militias entered the town one week ago and declared it to be under their control, however, not long after, ISIS counterattacked (mostly using tunnels) and drove them out.

Even with the capture of Gharanij, US-backed forces still find themselves in entangled in two other ongoing battles on the east Euphrates bank, again both for ISIS strongholds – these being represented by the strategic towns of Abu Hammam and Haijin.