You are here: Home / MidEastGulf / Kurdish forces: proxy ground troops for US in war against Islamic State 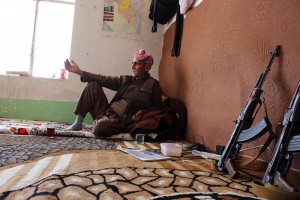 Khamad’s war is one of terrain — the Kurdish commander holds the high ground here and the Islamic State controls the villages that hug the Tigris River below.

The fighting is sporadic along a front line where men sit in lawn chairs, helmets askew, dutifully rotating through their watches. Lunch is made, tea is served. And Khamad, who will give only his nom de guerre, says that the militants are beyond his reach, their black flag only visible through aging binoculars.

If his men are shot at, it is by tanks that fire from the western banks of the river, or by heavy weapons that have the range to hit his fortified positions. Just in case, however, his outposts are ringed with moats — a last ditch effort to stop any potential raiding parties that might come in the night.

But Khamad’s most potent weapon is in the skies above. He motions upward with a crooked finger through scattered clouds, where the underbelly of two jets are visible, if only for a moment, before they bank and head south.

For Khamad and his men — fighters known as peshmerga — the U.S. and coalition aircraft have taken on a mythic status, talismans that announce themselves with a low rumble at 15,000 feet.

With the fight against the Islamic State in its second year, American forces and their peshmerga counterparts have become deeply entwined. Both are preparing for a battle to retake the large northern city of Mosul, an Islamic State stronghold about 30 miles away. It is an operation likely to require bloody house-to-house combat.

Although U.S. forces in areas controlled by the Kurds declined to be interviewed, there is evidence everywhere of their presence and the focus on Mosul. The United States, in both Iraq and Syria, has sought out proxy ground forces, backed by air power, to fight the Islamic State. It is a policy that recorded a recent success with the recapture of Ramadi by Iraqi forces, but Mosul, a major population center, will provide a significant test for both the Iraqis and Kurds. And U.S. officials say it could be many more months before local forces have the training and equipment needed to move on the city.

Kurdish officials have said they are ready to seize the city, but they are waiting for the Iraqi army to free up some of its soldiers still positioned in or near cities such as Ramadi and Fallujah. The Kurds, who say they have entrenched positions on three flanks around Mosul, acknowledge they need the involvement of Iraq’s counterterrorism force, the elite unit that has borne the brunt of combat in Anbar province to the south. To launch a joint offensive, the combatants will have to overcome long-standing tensions between Iraqi and Kurdish forces.

They also will need the Americans.

“If America helps us, we will destroy them,” Khamad says of an attack on Mosul. “If they don’t, we will stay” behind the lines.

U.S. advisers move from position to position along the front lines here, assessing enemy locations and coordinating air support. According to numerous peshmerga, many of those advisers stay on the front for a few hours or sometimes a few nights. Small bases stocked with U.S. and other coalition trainers have also popped up near the front — instructing small numbers of fighters while keeping them close to their positions.

Recently, the advisers have been training the Kurds in the kind of street fighting they will face when entering Mosul.

The peshmerga have front lines and rear areas and outposts scattered for hundreds of miles in a sort of western front made of berms and machine guns. The lines rarely move, so the American jets and advisers can keep tabs on friendly and enemy positions easily.

Airstrikes arrive faster and strike with greater accuracy than when the U.S.-led air campaign began in the summer of 2014. Now, Khamad says, it takes only 10 to 30 minutes for the jets to appear after he calls for support.

But Khamad has no advanced radio of the kind U.S. troops might use to talk to jets circling overhead. Instead, he says, he uses his cellphone to call someone — apparently a Kurdish-American — who is located a few miles away in a small U.S. compound sprouting satellite and radio antennas. There, the Kurdish American talks to the coalition aircraft and a joint command center in Erbil, the Kurdish regional capital, and directs them to the target.

“Yesterday we are attacked by an anti-aircraft gun,” Khamad said. “It only shot five times before the Americans destroyed it.”

According to Kurdish intelligence officials, who requested anonymity to discuss their relations with the Americans, the United States has also outfitted peshmerga counterterrorism units with American weapons and equipment, while U.S. Special Operations forces train them. The slick black uniforms and modern equipment of the elite peshmerga forces are a far cry from what their brethren on the front have; many Kurds there carry aging Kalashnikovs into battle and lack adequate winter clothing.

In recent months, the Kurdish counterterrorism units and their U.S. counterparts have been more than just training partners. In October, the Kurdish units fought alongside the U.S. Army’s Delta Force in a raid that left one American dead. Master Sgt. Joshua Wheeler was the first U.S. combat casualty in the war against the Islamic State. According to the Kurdish officials, multiple U.S.-Kurdish raids followed the death of Wheeler, all in attempts to free captured peshmerga forces.

Col. Steve Warren, the spokesman for the U.S. led operation in Iraq and Syria, would not discuss whether U.S. forces continued to accompany Kurdish counterterrorism units on operations.

Mukhlis Hamad, a peshmerga since 1991, travels about 20 minutes from his frontline position near Sultan Abdullah to training sessions with the Americans. In a walled-off subsection of a peshmerga base, known as the Black Tiger Camp, there is a small detachment of U.S. Army Special Forces responsible for training the peshmerga for this section of the line in addition to a detachment of German trainers. The Americans live in a base within a base, the tell-tale HESCO barriers — wire mesh containers filled with sand — provide a wall around their tents and vehicles.

The peshmerga say the Americans come and go as they please.

The Black Tiger base peshmerga commander is Maj. Gen. Sirwan Barzani — also a telecom magnate and nephew of Masoud Barzani, president of the Iraqi Kurdistan Region.

He is in charge of roughly 15,000 troops, including a small number of Iraqi battalions and Arab tribes, that compose the peshmerga’s sixth defensive sector he has commanded since August 2014. In response to a recent Amnesty International report that said Kurdish troops had driven out Arab populations from villages taken back from the Islamic State, Barzani said in an interview that there was no plan to drive people from their homes, but as the peshmerga cleared the militants from northern Iraq, many villages had been heavily mined and his men had no choice but destroy them in place.

Like many peshmerga commanders and Kurdish officials, Barzani is continuously looking for new equipment, especially from the United States. Most of what he does have was taken from the Islamic State.

“We have no heavy machine guns, no armored vehicles from the West,” Barzani said. “Nothing.”

The Black Tiger’s motor pool is stocked with a few modified and aging Russian armored personnel carriers, as well as U.S. Humvees and MRAPs that Barzani said were first taken from the Iraqi army by the Islamic State and then recaptured, repainted and repurposed by the peshmerga. For the most part, however, his men get around in Toyota pickups and Land Cruiser high backs.

Barzani said his men need more anti-tank weapons, adding that MILAN systems provided by Germany have helped his forces significantly. In 2015, he started the year with only two of the anti-tank guided-missile systems, but now he has five.

For the troops on the frontline, the MILAN has been the only weapon that can destroy the Islamic State’s heavily armored suicide vehicle; it can hit targets more than a mile away.

For Khamad and his men stationed in the hills above Sultan Abdullah, the MILAN has been used to keep the militants contained to the valley below. With large stretches of open fields between them and the enemy, they are well out of range of the Islamic State’s Kalashnikov rifles.

And so they watch and wait.

“I’ve been in many fights,” said Khamad, who has been fighting with the peshmerga for decades. “But I’ve never seen anything like this.”