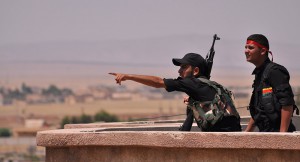 The Kurdish People’s Protection Units are waging a successful campaign against Daesh forces in Syria, targeting the terrorist movement’s primary source of income.

The Kara-choh oilfield, located in Syria’s Hasakah province, was recently liberated from Daesh by the Kurdish People’s Protection Units (YPG) as part of their ongoing campaign to deprive the terrorist group of its chief source of income: the illegal oil trade.Most of the oil pumps at Kara-choh are currently inoperable, according to RT journalists that managed to visit the complex. Furthermore, the Kurds would’ve been unable to sell the oil themselves even if they tried: the territories to the west and to the south are controlled by Daesh, Iraq to the east doesn’t require any surplus oil, and Turkey to the north apparently considers Syrian Kurds a bigger threat than even the Islamist terrorists.

“Turkey was always against us – they were hostile from the start. They stopped anything from crossing the border: medicine, food, goods,” head of the Kurdish Energy Organization Suleiman Khalef told RT.

In an attempt to satisfy their need for fuel, the Kurds managed to construct makeshift oil refineries. These facilities can only be used to successfully produce low-quality diesel fuel and petrol, so the Kurds simply store oil waste they can’t refine in the open for later use.

While this method is obviously harmful for the environment, the Kurds have no other way to provide the population with basic needs, RT points out.”We only extract oil from wells that have the most gas. We use it to run a gas power plant, which keeps our towns and cities at least partially supplied. We give priority to essential enterprises, such as bakeries, hospitals, and schools,” Suleiman Khalef added.

According to RT, several years ago the Kurds used to control only about 1,000 oil pumps, but since then this number has tripled as the YPG keeps dislodging Daesh forces from the oil production facilities and depriving the terrorist movement of a sizeable portion of its revenues.

Daesh forces have been relying heavily on revenues from the black-market sales of drugs, smuggled crude oil and human trafficking. According to an assessment made by Adam Szubin, a US Treasury official, in December, the Daesh militants are earning up to $40 million per month selling oil stolen from production facilities in Syria, and have gained up to $500 million in total from their illegal oil trade.