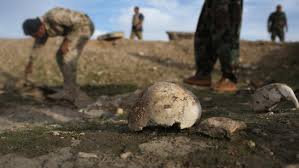 Kurdish forces say they have uncovered two mass graves outside the northern Iraqi town of Sinjar after driving out the Islamist extremist group ISIL.

According to the Iraqi Kurdish director of intelligence, the first grave contained 78 bodies of elderly women, the second contained between 50 to 60 bodies of men woman and children.

ISIL militants captured Sinjar in the summer of 2014 and killed and captured thousands of members of the Yazidi religious minority.

The younger women were taken into sexual slavery, but according to witnesses who survived, the older ones were led behind an institute in the Solav area east of the Yazidi heartland of Sinjar and, a short while later, gunfire was heard.

The Yazidi are a religious sect whose beliefs combine elements of several ancient Middle Eastern religions.

Most of Iraq’s Yazidi population is still living in camps in the Kurdistan region, and more than 2,000 women remain in ISIL captivity.

Kurdish forces retook Sinjar town itself on Friday in a two-day offensive backed by airstrikes from the US-led coalition.

The graves are to left undisturbed so that experts can analyse the remains and collect evidence for a case to recognise the atrocities inflicted on the Yazidi community as genocide.