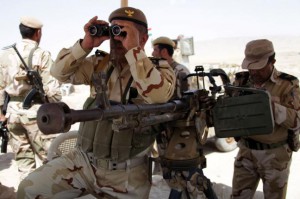 Kurdish forces backed by US-led air raids have advanced on Tal Abyad, a Syrian town used by Islamic State militants as a conduit for foreign recruits. Turkey has reluctantly taken in 3,000 Syrians who fled the fighting.

An envoy for the US-led aerial coalition claimed that Kurdish fighters in northern Syria were scoring territorial gains against the Islamic State (IS) jihadists and were “very close” to severing a supply route to the main IS city of Raqqa.

Brett McGurk, the coalition’s US deputy special envoy, speaking on NBC’s “Meet the Press” program, said Kurdish and other units were giving IS a “beating.”

The Britain-based Syrian Observatory for Human Rights said Kurdish fighters had captured more villages on Sunday near Tal Abyad, where fighting had raged on its eastern outskirts.

Kurdish sources quoted by the news agency AFP said the Kurdish People’s Protection Units’ (YPG) goal in taking the town was to cut off a crucial supply line allegedly used by the jihadists to bring in foreign fighters and supplies from Turkey.

The jihadis had blown up bridges southeast and southwest of Tal Abyad to prevent the YPG from pushing forward, the observatory added.

Reports: Kurdish units advance on IS

Since January, YPG units have chipped away at jihadist territory on either site of Raqa – from Hasakeh province to the east and Aleppo to the west.

Turkish President Recep Tayyip Erdogan said during the weekend that he was troubled by the last Kurdish advance inside Syria and claimed that territory captured would also be occupied by the Kurdistan Workers Party (PKK).

In past decades, the outlawed PKK has conducted insurgency for Kurdish self-rule inside southeastern regions of Turkey.

“This could lead to the creation of a structure that threatens our borders, ” Erdogan said. He added that ethnic Arabs and Syrian Turkmen had become victims of the fighting across northern Syria.

Fearing a major battle around Tal Abyad, Kurdish and Arab civilians, many carrying possessions, had clamored behind barbed wire for entry into Turkey.

Turkish troops initially fired water cannon and even pepper spray to keep them at bay.

Turkey’s Deputy Prime Minister Numan Kurtulmus claimed they were not fleeing the embattled town but were instead trying to escape US-led coalition bombings.

“Our priority is for them to remain within their border. We will continue to provide humanitarian aid to them,” Kurtulmus said.

Hours later, Turkey’s government reversed its decision and allowed in the waiting refugees.

The state-run Anadolu news agency said Turkey had already said that 13,400 Syrians had fled into Turkey since June 1.

Since 2011, Turkey has taken in some 2 million refugees.