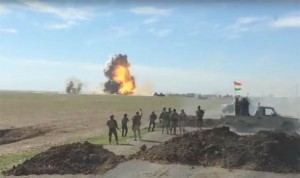 Dramatic footage has emerged showing the moment an Islamic State (ISIS) suicide bomber was blown up by Kurdish freedom fighters.

The jihadi maniac was driving a pick-up truck packed with one TONNE of explosives towards the Peshmerga frontline when he was expertly taken out by a soldier with a rocket launcher.Footage posted online shows the suicide bomber speeding across the plane as a narrator, believed to be a Peshmerga trooper, makes increasingly urgent pleas to his colleagues to take him out.
Several rockets are fired and miss their target before one finally finds its mark in the nick of time, with the explosive-laden car just yards from the Kurdish frontline.Kurdish media outlets posted the video online on Christmas Eve, when the incident is thought to have happened.

The description with the video says the ISIS jihadi was carrying more than a tonne of TNT explosives inside a Ford pick-up truck before he was blown up just outside the terror group’s stronghold of Mosul, in northern Iraq.

In the video a Kurdish fighter can be heard in panicky voice saying “it’s coming closer and closer…come on…hurry and hit it…hit it before yelping in delight as the car goes up in flames.

Debris shoots up in the air as the vehicle ignites in a massive explosion, instantly incinerating the suicide bomber at the wheel.

ISIS frequently uses suicide bomber cars laden with explosives to attack enemy lines in a bid to cause panic.

The latest incident occurred on the same stretch of frontline where the terror group suffered a crushing defeat earlier this month, when they unexpectedly ran into Canadian special forces.More than 200 jihadis were killed, including some suicide car bombers, in a humiliating setback.

Peshmerga forces backed by allied Arab rebels and Western airstrikes seized the Tishreen dam, which is in a key position in the north of the war-ravaged country.

After intense fighting with ISIS jihadis they stormed the control room, held since the terror group since last year.The capture of the dam is a huge coup for the Kurds, as it provides most of the electricity used across northern Aleppo province, much of which is still under ISIS control.

It was their second major victory in the region in recent weeks, coming after their forces ousted ISIS fighters from some 200 villages in the northeastern province of Hasakeh.

Sherfan Darwish, spokesman for an Arab rebel group in the SDF, wrote online: “Congratulations to our peoples… the battles are ongoing, the operation is ongoing, and the victories are ongoing.”

The Syrian Observatory for Human Rights also said the SDF had “cleared the eastern bank of the Euphrates and crossed the dam.”Spokesman Rami Abdel Rahman: “The battles are now on the western bank of the river.”

ISIS was also being pushed back in neighbouring Iraq today, with the Iraqi army declaring victory in its battle to recapture the key city of Ramadi.

Jihadi fighters have been all but driven out of the city centre, with the army recapturing the central government compound and seizing a huge cache of terrorist weapons.

Yesterday the hate group’s crazed leader Abu Bakr al-Baghdadi issued a bizarre rallying cry to his supporters, insisting the defeats were a “blessing from Allah” and calling on Muslims across the globe to join the Caliphate.