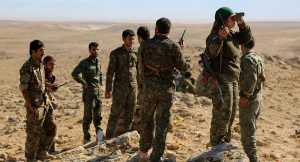 Kurdish-led and international coalition forces raided Islamic State (IS) positions yesterday in eastern Syria — a site of recent IS activity, like reported by al-monitor.com.

The Syrian Democratic Forces (SDF) carried out an operation in Deir ez-Zor on Wednesday night. They were supported by Combined Joint Task Force-Operation Inherent Resolve, the official name of the US-led international coalition against IS in Syria and Iraq. The raid led to the arrest of an IS fighter, the coalition spokesman Col. Myles Caggins said on Twitter today.

The coalition supports the multiethnic SDF, which is led by the Kurdish group the People’s Protection Units (YPG), but also includes Arab and Syriac Christian divisions. The SDF said the arrested IS fighter was being questioned. The operation took place in a rural area in the east of Deir ez-Zor province, the SDF said on Twitter.

Deir Ezzor 24, a local media outlet covering the province, said the raid by the SDF and the coalition took place late Wednesday evening in the village of Azzir. The coalition used helicopters and soldiers stormed a house; two IS members blew themselves up to avoid arrest and an Iraqi IS fighter was arrested, the outlet reported, citing an unnamed correspondent.

The Syrian Observatory for Human Rights, a UK-based monitoring group, said that a Syrian man was arrested and that the SDF ordered people in the village to stay inside during the raid. The observatory said it could not determine whether he was an IS member.

Recently, IS has increased its activity as the region grapples with the coronavirus. In Iraq, which borders Deir ez-Zor borders, IS launched a series of dayslong assaults on Iraqi security forces this week, including attacks relatively close to Baghdad. In April, as Iraq was under lockdown, IS started attacking security forces directly, in contrast with its previous attacks on small villages.

In Syria, Deir ez-Zor province is one of the centers of IS’ recent activity. The group has increased attacks, executions and bombings in the desert in the east of the province. A military source close to the Syrian government told Al-Monitor last month that the group has heavy weaponry and explosives there.

Deir ez-Zor has also experienced recent unrest with demonstrations against the SDF. Some in the mostly Arab area feel the Kurdish-led SDF neglects services and steals fuel in the energy-rich area. One journalist told Al-Monitor in March that many residents are frustrated with the regular raids and arrests there.