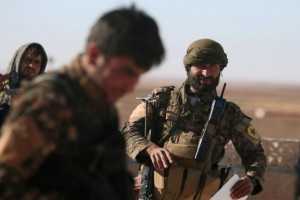 Several villages held by Islamic State have been captured by the Syrian Democratic Forces (SDF), a coalition of militias backed by the United States that includes a strong Kurdish contingent, an organisation that monitors the war said on Monday.

The advance is part of a military campaign backed by an international coalition led by the United States to drive Islamic State from its Syrian capital of Raqqa. It follows SDF gains against the jihadist group across the north of the country.

The strongest group in the SDF is the People’s Protection Units or YPG, a Kurdish militia, but Washington has said that any operation to retake Raqqa should be predominantly Arab, the ethnicity of most of the city’s residents.

The latest advances in the countryside about 50 km (30 miles) west and northwest of Raqqa follow an earlier phase of SDF gains on another front about 30 km north of the city.

Islamic State had been on the back foot in both Syria and Iraq, where it is under attack in Mosul, its biggest and most important possession, and after a string of U.S. air strikes that have killed many of its leaders this year.

However, earlier this month it launched a surprise attack 160 km southwest of Raqqa to retake the ancient desert city of Palmyra, which it had lost in March to Syrian army forces backed by Russian air power after a nine-month occupation.

That attack demonstrated the risks still posed by the group across Syria even after its territorial losses there since mid-2015, including holdings along the Turkish border which were once its main route for supplies and recruits.

Complicating the efforts against Islamic State is a second campaign being waged against it in northwest Syria by Turkey and Syrian rebel groups allied to Ankara. This has taken a large area from the jihadist group but is also aimed at stopping Kurdish expansion.

The Turkish-backed Syrian rebels are now attempting to capture the city of al-Bab from Islamic State, a move that will end Kurdish hopes of uniting their two separated areas of self rule in northern Syria.

Early on Monday, the Turkish military said one of its soldiers had been killed in a car bomb in al-Bab on Sunday and that 11 militants were also killed in clashes that day.