You are here: Home / FakeNews / Kremlin tells companies to deliver only good news 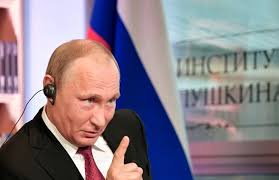 The Russian leadership has told major companies to supply it with news stories that put its stewardship of the country in a positive light, according to documents seen by Reuters.

A seven-page document spelled out the kind of articles required, with a focus on new jobs, scientific achievements and new infrastructure, especially those involving state support. It also detailed how the stories should be presented, and gave a weekly deadline for submissions.

The instructions were sent last month by the energy ministry to 45 companies in Russia’s energy and utilities sector including Rosneft (ROSN.MM), Lukoil (LKOH.MM) and Novatek (NVTK.MM), according to a second document, a list of recipients.

The drive coincides with the run-up to a presidential election in March next year when President Vladimir Putin needs a strong mandate with high turnout to maintain his firm grip on power after dominating Russian politics for two decades.

“Life for the majority of people has become calmer, more comfortable, more attractive. But many such examples often escape the media’s attention,” said the first document.

“Our task, through a creative and painstaking approach, is to select such topics and subjects and offer them to the media.”

That document, which did not mention the election, said the news items to be supplied were to feed a “positive news wire” and should correspond to two themes: “Life is getting better” and “How things were; how they are now”.

Both documents were attached to an invitation, dated Oct. 9, sent by the energy ministry to senior executives in the public relations and government relations departments of the firms, of which 17 are state-controlled and 28 privately-held. The invitation requested they send representatives to an Oct. 12 meeting at the ministry in Moscow to discuss how to help the government’s PR effort.

Reuters saw a copy of the invitation and spoke to three executives who received it. According to the invitation, the news initiative was requested by Sergei Kiriyenko, the first deputy chief of staff in the presidential administration.

Oil and gas provide Russia’s biggest source of revenue and energy firms are among the most powerful companies and biggest employers. Reuters has not found evidence that similar instructions were sent to companies in other sectors.

The Oct. 12 meeting was chaired by Deputy Energy Minister Anton Inyutsyn, and an official from the presidential administration was also present, according to one of the sources who attended. The two officials went through and explained the instructions laid out in the seven-page document, said the source, who added that the election was not mentioned.

Reuters reported in February that the ministry had enlisted energy companies to give it advance notice about developments that could influence public opinion.

The meeting last month and the guidelines circulated in preparation for it show that, since then, the initiative has stepped up into a higher gear, with companies being handed highly specific instructions on how they are expected to help.

It was not clear if the companies had acted on the instructions.

The news guidelines document said the government wanted to highlight “victories and achievements”.

It included a nine-point list of the kind of news that companies should supply. It asked, for example, for stories about business units “where it’s possible to say that state support helped lift them out of crisis, restored modern production, and re-equipped them with new equipment and gave work to local residents”.

Examples given of the kind of events of interest to the government from elsewhere in the corporate world included state lender Sberbank hiring 700 people in the Volga river city of Togliatti, a festival funded by a company in Kaliningrad region for young people with hearing difficulties and a sports centre being opened in Cherkessk, southern Russia.

The document also held up the case of Yevgeny Kosmin as an example of a positive news story, a miner in western Siberia whose team extracted 1.6 million tonnes of coal in July this year, a monthly record.

That carried echoes of Alexey Stakhanov, a miner who in 1935 extracted almost 15 times more coal during a shift than his quota required. Communist propaganda held Stakhanov up as a symbol of Soviet industrial prowess.

The instructions stipulated that companies should submit positive news stories every week – on the Monday, or Tuesday morning at the latest.

They said the companies should present their items in the format of a table, with new additions highlighted in a coloured font, and accompanied by a press release that could be passed on to journalists with minimal editing from government officials.

The document also required each company to provide a contact person who could provide extra information to journalists, tell TV news crews how to reach the venue to report on an event, and organise access for news crews to the company’s sites.

Reuters was not able to establish if the Kremlin had made similarly specific demands of companies in the past.

Putin has not yet declared his intention to seek re-election. Most Kremlin observers say he will. Opinion polls show he will win comfortably, with many voters crediting him with restoring national pride.

The Kremlin’s biggest headache with the election, scheduled for next March, is ensuring a strong turnout, say many political analysts.

With the economy weak and many people viewing the result as a foregone conclusion, voters may be tempted to stay away from polling stations. A low turnout could undermine Putin’s legitimacy in his next term, the analysts say.