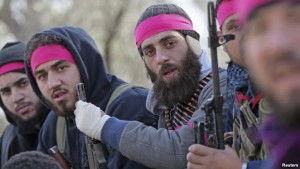 Kosovo President Atifete Jahjaga says her country has increased its efforts to arrest citizens who have become foreign fighters with Islamic State (IS) in Syria or Iraq.

In a visit to Voice of America’s Albanian service Thursday, Jahjaga said that while 13 people from Kosovo were found to have joined IS last year, there have been no new IS recruits from Kosovo in 2016.

Kosovo is the “only country in the region, and even wider,” with a very well-organized police operation that has conducted several arrests of foreign fighters in Kosovo who at one time had joined IS, she said.

Several hundred young people from the Western Balkans have engaged in foreign fighter activity in Syria. Kosovo’s Ministry of Internal Affairs says about 320 Kosovo Albanians have joined IS fighters and about 60 have died in Syria.

Jahjaga said Kosovo police have also shut down several illegal mosques in the country, as well as several NGOs that have been operating as front organizations to radicalize youths. However, she said, “no country is immune” to this global threat of terrorism and violent radicalization.

The wide-ranging interview also covered political and economic development in Kosovo. Appearing on VOA Albanian’s Ditari television program, Jahjaga noted that “the political class in Kosovo continues to benefit from nepotism and has yet to demonstrate the will to wage war against corruption, which has deterred foreign investment.”

The White House said Biden thanked Jahjaga for her “efforts to counter violent extremism and her leadership in strengthening Kosovo’s democracy.”

Biden also emphasized the United States’ strong support for the EU-facilitated dialogue between Kosovo and Serbia, and urged the two countries to advance the normalization process.