You are here: Home / Europe / Kosovo indicts 32 for fighting and recruiting for Islamic State 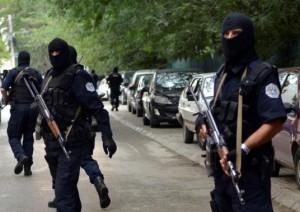 A prosecutor in Kosovo indicted 32 people on Thursday for fighting alongside Islamist insurgents in Syria and Iraq and recruiting others from the impoverished Balkan country to fight.

Security officials say more than 200 people from Kosovo have gone to fight in Syria and Iraq, stirring fears of the threat they might pose when they come home. More than 30 are believed to have been killed.

“For some of the suspects there is strong evidence that they fought and joined the terrorist group in Syria known as ISIS,” a statement from the state prosecutor’s office said, referring to Islamic State. “Others have recruited people to send to the war in Syria and have collected money for terrorist organizations.”

All the indicted men were arrested in August 2014, when police began a large-scale operation to deter would-be Islamic State fighters. The prosecutor’s office said seven suspects remained at large.

Most of Kosovo’s ethnic Albanian majority are nominally Muslim but overwhelmingly secular.

Kosovo declared independence from Serbia in 2008 with the backing of the West. Earlier this year, it adopted a law introducing jail sentences of up to 15 years for anyone found guilty of fighting in wars abroad.