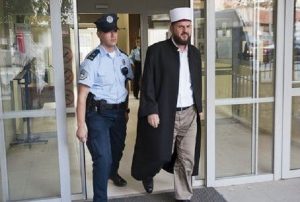 Prosecutors in Kosovo say they have charged an imam with urging people to join terror groups in Syria and Iraq and commit terror acts and also inciting inter-ethnic hatred.

A statement Monday said that the suspect, identified as Shefqet Krasniqi , from Pristina, was also accused of tax evasion in his business, like reported by theglobeandmail.com.

Prosecutors said in 2013-14 the imam used his prayers and social websites to urge “others to go to the conflict zone in Syria and Iraq and later commit terror acts.”

He faces up to eight years in jail.

A few hundred ethnic Albanians from Kosovo are believed to have joined Islamic extremist groups and about 70 are still believed to be there. Authorities claim that in the past 18 months no one has gone there.