You are here: Home / Europe / Kosovo, home to many ISIS recruits, is struggling to stamp out its homegrown terrorism problem 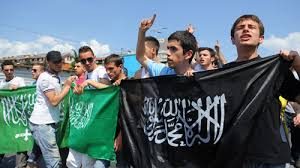 For all of the attention paid to the emergence of homegrown Islamist terrorists in Belgium, France and other European countries, one of the continent’s biggest radicalization problems is taking places on its fringes, like reported by washingtonpost.com.

Kosovo, the tiny Muslim-majority Balkan nation of just 1.8 million, has produced more foreign fighters per capita than any other Western nation since the Islamic State declared its now-defunct caliphate in 2014. Four-hundred-and-thirteen Kosovo citizens have joined that group and other Islamist extremist factions in that time.

As it attempts to join the European Union, Kosovo has been under pressure to stamp out its radicalization problem — and authorities claim they have succeeded. Since 2013, Kosovar police say they have indicted more than 120 terrorist suspects and arrested many more, including well-known conservative imams suspected of recruiting people to fight abroad.

“Now we don’t see terrorism as a threat,” said Kujtim Bytyqi, one of the government’s senior security policy analysts and the head of Kosovo’s strategy to counter violent extremism. “There is total silence. All imams, even if they want to say something, are afraid of the government.”

But many of those suspected terrorists, convicted under an older counterterrorism law that limited prison sentences to five years, are now being freed. And some say attempts to rehabilitate them have come up short.

“We are growing stronger and getting smarter” said Fitim Lladrovci, 28, a former Islamic State fighter and inmate, referring to extremists. “Terrorists will not be reintegrated, and there may be attacks here.”

Anne Speckhard, a psychiatrist who directs the International Center for the Study of Violent Extremism, said that Lladrovci’s contempt for rehabilitation and strengthened radical beliefs are likely emblematic of “some other returning militant jihadis well beyond Kosovo.” The trend, she argued, “bodes ill for all of us.”

It’s a potentially ominous development for deradicalization efforts across the continent. “We have to provide a deradicalization model for the whole of Europe,” said Garentina Kraja, a senior external researcher for the Kosovo Center for Security Studies. “We’re a Muslim-majority society but we’re secular Europeans. So it feels like if there’s an example to be found somewhere, this is where we can provide a response.”

Kosovo may also be an entry point into the E.U. to launch attacks, said Daniel Koehler, the director of the German Institute on Radicalization and De-radicalization Studies. In early June, Kosovo authorities arrested a couple suspected of planning attacks on NATO troops in Kosovo as well as on public places in France and Belgium.

Since April, the U.S. Department of Justice has helped implement rehabilitation programs in Kosovo’s prisons to terrorism charged suspects. Before then, however, the country had no comprehensive program for rehabilitating returned fighters according to the 2018 Kosovo European Commission report.

“Most European countries have much more stable programs in place. In Germany, the UK and France, there is a long history of social welfare and prison infrastructure much stronger than in Kosovo,” Koehler said. “Kosovo is still recovering from its 1998-99 war against Serbia, and suffers corruption in the public sector and problems with rule of law.”

That strategy — rehabilitating extremists through Islamic reeducation — has been tested in Saudi Arabia and other Arab countries before, said Koehler, “but the method rarely works.” Lladrovci, who was released from prison three months ago after serving a bit more than three years, scoffed at the idea of sending moderate imams vetted by the intelligence services. Returnees, he said, won’t accept those imams “because they are not real Muslims.”

Anne Speckhard, a psychiatrist who directs the International Center for the Study of Violent Extremism, said the program also has the wrong goal: Persuading individuals not to use violence rather than trying to deradicalize them altogether.

Speckhard believes deradicalization needs to be the goal; a truly deradicalized person, she said, will not “flip easily into terrorism” whereas one who is “disengaged” from violence but still ideologically committed is “far more likely to return.”

Liridon Kabashi, 31, another former Islamic State member, said he simply never encountered any prison treatment efforts. “For two years I heard talk about the program, but I never saw it in reality,” said Kabashi, who returned to Kosovo in 2013 and served a three-year prison term.

Unlike Lladrovci, he regrets joining the Islamic State and never justified terrorist attacks across Europe. Still he said that “other returnees” embrace a radical ideology and need real “de-radicalization and reintegration programs” before they become more sophisticated and plot future attacks in Kosovo or beyond.