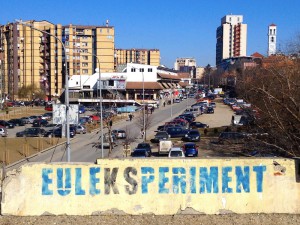 Supporters of firebrand politician Albin Kurti clashed with police in Pristina on Monday (12 October), in a sign of the enduring fragility of Kosovo and the region 20 years after the war.

Some 200 protesters threw stones at police and set fire to three police cars before being pushed back by riot squads, which fired tear gas, in a confrontation lasting two hours, Reuters reports.

Fourteen policemen and one protester were injured.

The violence came after police hauled in Kurti, the head of the Vetevendosje (“self-determination”) political party, for questioning.

The 40-year old politician was interrogated over an incident last Thursday, in which he set off a tear gas canister inside parliament, causing some MPs to faint.

He did it in protest over the Association of Serb Municipalities (ASM) – an EU-brokered deal to give semi-autonomy to Kosovar Serb enclaves in Kosovo.

Following his release on Monday, he spoke briefly outside the parliament building, saying: “I call on you not to stop until we prevent the creation of the community”.

Vetevendosje started out as a protest movement, daubing anti-EU and anti-government graffiti around Pristina.

But it became the third largest political party in Kosovo in last year’s elections, winning 14 percent of the vote.

It says the ASM deal is the first step in the creation of an autonomous Serb entity, on the model of Republika Srpska in Bosnia.

It believes EU states and the US are willing to sacrifice Kosovo’s territorial integrity for the sake of better ties with Serbia in order to reduce Russia’s influence in the Western Balkans.

It also says Western powers have given Kosovo leaders, such as deputy PM Hashim Thaci, carte blanche on corruption in return for compliance on their regional agenda.

The ASM deal has prompted Albanian minority enclaves in Serbia to declare their own association – a move fiercely rejected by Serbia’s nationalist leaders.

The Kosovo unrest comes amid a simmering political crisis in neighbouring Macedonia, where the main Albanian party, the DUI, of Ali Ahmeti has split in two amid calls for greater minority rights.

Republika Srpska leaders in Bosnia are also planning to hold a referendum on the authority of the federal court in what EU foreign ministers, on Monday, said “would challenge the cohesion, sovereignty, and territorial integrity of” the country.

Kosovo stability is also likely to be tested when a new EU special tribunal in The Hague starts work in early 2016.

The tribunal is to indict former commanders of the KLA, the Kosovo guerrilla army which fought Serbia in the 1990s, on war crimes charges, including, potentially, Thaci himself, who stands accused, in a Council of Europe report, of running an organ-trafficking mafia.

The prospect raises concerns that ex-KLA fighters from Drenica, Thaci’s home region in Kosovo, could also take to the streets.

Thaci recently told EUobserver he will comply with the tribunal’s work.

“The tribunal will dispel any doubt about our [the KLA’s] past”, he said, adding: “But we will do our utmost not to allow the perpetrators of crimes [Serbia] and the victims of crimes to become equals in the books of history”.