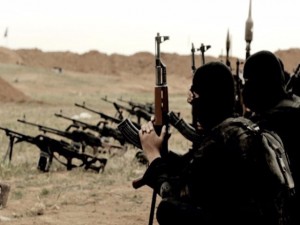 Kosovo police said they arrested 19 people suspected of planning to carry out terrorist attacks in Kosovo and Albania, against Israeli footballers recently playing a World Cup qualifying match with Albania in Elbasan, central Albania, on Saturday.

“These persons were planning terrorist acts in the Republic of Kosovo and against the Israeli football team and their fans who participated in the Albania-Israel match,” police said in a statement.

The attacks were prevented by police in cooperation with the Kosovo Intelligence Agency, AKI, and the Kosovo Special Prosecution, as well as authorities in Macedonia and Albania, the police said.

The arrests of 18 Kosovo Albanians and one citizen of Macedonia were carried out between November 4 and 16, the police said.

During the arrests, substantial explosives, including 281 grams of TATP, 2.5 kg of other explosive substance, as well as personal weapons and radio-communication devices were found.

The people who were arrested were divided into several groups and were being coordinated by two Kosovar ISIS members, Lavdim Muhaxheri and Ridvan Haqifi, the police said.

Muhaxheri and Haqifi are high-ranking members of ISIS in charge of Kosovo and Albanian fighters. Both have threatened Kosovo and Albania via video, because of their governments’ adherence to the international coalition against ISIS.

Reports say around 300 Kosovo Albanians have joined ISIS since the beginning of the conflict in Syria in 2011.

Kosovo police said the recent arrests were carried out in the towns of Pristina, Mitrovica, Ferizaj/Urosevac, Kacanik and Vitia/Vitina.

In response, Kosovo security forces have increased their presence around the buildings of Kosovo government, international organizations as well as Serbian Orthodox churches and monasteries.

Meanwhile, the Simon Wiesenthal Centre’s Director for International Relations, Shimon Samuels, wrote to the President of Kosovo, Hashim Thaci, on November 15, protesting against the alleged sale of “antisemitic hate literature” near what he called “the presidential palace.”