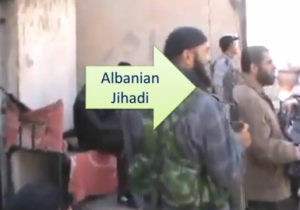 According to Kosovo prosecutors an ethnic Albanian have been charged with joining extremist terror groups in Syria.  The man, a Kosovo citizen identified only as R.D., had gone to Turkey last month and tried to cross into Syria to join military organizations there, like reported by insidesyriamc.com.

At Kosovo’s request, Turkish authorities arrested him and extradited him back to Kosovo earlier this month. The defendant is accused of joining or taking part in extremist military groups and in military conflicts outside the country, charges that may bring him up to 15 years’ imprisonment.

Meaanwhile, the United Nations is urging authorities in Kosovo to have a clear strategy to deter potential fighters from joining Islamic extremists in Syria and Iraq, and to offer more employment possibilities and education.

Available statistics, unfortunatelly, are spotty but still, 335 citizens have traveled to or been caught by Kosovo police en route to conflict zones in Syria and Iraq since 2012, making Kosovo one of Europe’s largest exporters of foreign fighters on per capita basis. They included 253 were men, 55 women and 27 children.