You are here: Home / Mediterranean / Kobler tells UN Security Council: Hafter must have a role 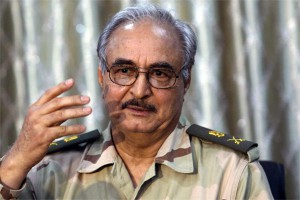 “I have always said General Hafter must have a role and I would like to sit together with him and discuss it”, Kobler told a press conference after briefing the 15-member UNSC with a report on the latest developments in Libya.

In the report, Kobler spoke of the “fragile peace” in Libya’s Oil Crescent which suffered a “fierce blow” when army units commanded by Hafter attacked four oil terminals previously under control of forces loyal to the Presidency Council.

“This development will further hinder oil exports, deprive Libya of its only source of income, and increase the division of the country. This has to stop,” Kobler explained.

The UN official said that a country as wealthy as Libya should be making better use of its resources  instead of having its people queue for long periods of time in front of banks to withdraw the daily limit of $40 to cover rising costs of basic needs.

On the question of laying the foundation for stability and rebuilding the country Kobler said, “It is high time that Libyans join forces to urgently address the burning political, security and economic problems of Libya”.