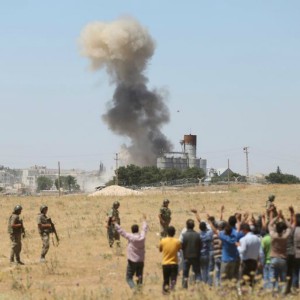 Turkey’s pro-Kurdish HDP party is describing an ISIL attack on the Syrian border town of Kobani as a “massacre.”

It is blaming it on Turkish state support for the militants, a move set to fuel tensions in Ankara.

At least 15 people were killed and 70 wounded in the assault, according to hospital officials.

ISIL is striking back after losing ground in recent days to Kurdish-led forces, who are within 50 kilometres of its de-facto capital Raqqa.

“It’s not logical to say that the Islamic State gang, which has been using Turkish borders comfortably all of the time, did not make use of the border gate today while carrying out this attack,” said Figen Yuksekdag, co-leader of the Peoples’ Democratic Party (HDP).

The HDP entered parliament for the first time after this month’s elections.

Meanwhile, in Syria’s south, rebels have launched an assault to capture Deraa from government forces.

If it falls, it would be the third provincial capital lost by President Bashar Assad in the four-year long war after Raqqa and Idlib.