You are here: Home / MidEastGulf / Kobani attackers entered from Turkey 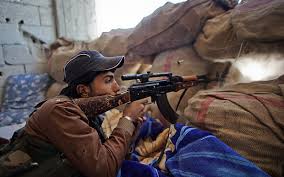 Syrian television said on Thursday that Islamic State fighters who carried out a deadly assault on the predominantly Kurdish border town of Kobani had entered Syria from Turkey.

The channel did not give a source for its newsflash. Earlier on Thursday hospital officials in Kobani told Reuters that 12 people were killed and 70 wounded in a car bombing and other attacks by Islamic State fighters.