In 2016, there is no reasonable doubt about what the biggest threat to world peace is, Daesh. Despite being universally stigmatized, they never fail to recruit new converts. The reason behind the success is that Daesh borrows tools from the Western pop culture, video games and social networks to win the people’s hearts and minds. 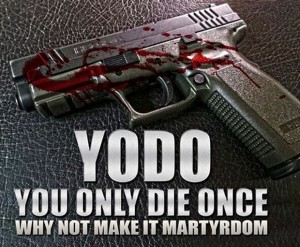 Militant Islamist groups worldwide have pledged allegiance to Daesh, which today claims to have established “provinces” in 14 countries, including Libya. Daesh are ruthless, uncompromising and utterly fanatical. They slay their enemies in gruesome ways and call it jihad. Even with the inhuman cruelty, the terrorists continue to recruit newcomers from all parts of the world.Perhaps somewhat abnormal for anti-Western militants, Daesh relies heavily on Western propaganda tricks and pop culture gimmicks.

“Daesh are very skilled at using propaganda and other instruments. They use language that young people recognize and fall under the spell,” Jon Fitje Hoffmann, technical director for analysis at Norway’s Police Security Service (PST), told Norwegian national broadcaster NRK.

“They use our whole popular culture against us and still say ‘death to the Western culture.’ They turn it all upside down. I think that is very interesting artistically speaking,” he said.

The difference between Daesh and al-Qaeda in terms of propaganda methods is therefore even more striking. Whereas al-Qaeda’s publicity relies on bearded men, preaching in Arabic for hours, Daesh stakes on artistically captivating footage shot from multiple cameras with an ideological twist. Besides, the concise and action-packed style melds together with the spotless production striking similarities with American film and television.

“I would like divide their videos into two categories. On the one hand, you have those pure bragging videos, showing how Daesh have beaten all their opponents. You can see their enemies dig their own grave and being executed. <…> The second category looks more like travel videos, which show how great it feels to live in the Islamic State,” Faldbakken said, pointing out the “Visit Daesh” feel about them.

Apart from videos, Daesh use computer games to appeal to the younger public, Norwegian game developer Jon Cato Lorentzen said. In particular, shooting games are “improved” in a way that allows you to play as a Daesh soldier.

“They use games because it is a place where young people meet. If you work within marketing and want to target a specific audience, try to stay where they are. This is a common mantra in the advertising industry,” Lorentzen said.

Another one of Daesh’s features is that it has a large number of followers who have grown up in the West and thus possess knowledge of software, games and movies, which also accounts for their fluency in the social networks. Compared to Daesh, other militants mostly rely on local resources and therefore have a limited capacity. With internet slang evolving with lightning speed, it becomes increasingly difficult for an outsider to follow.

“They have enough people who have grown up with video games, Twitter, Facebook and Youtube — the whole internet culture. They know very well how to respond and how to create a ‘meme,’” Faldbakken pointed out.

Daesh do not hesitate to take Western popular culture mottos and reverse them to achieve a dramaturgical and ideological impact. An example of this includes aptly turning the motto acronym YOLO (You Only Live Once) into YODO (You Only Die Once).