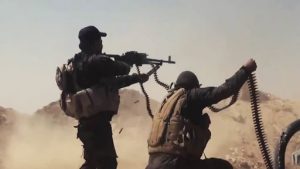 The Islamic State (IS) militants carried out an attack on pro-Iranian Hashd al-Shaabi in Kirkuk, killing two militiamen and wounding nearly a dozen, an official said according to basnews.com.

Hiwa Rasheed, a Kurdistan Democratic Party’s (KDP) representative in the area, told BasNews that the incident took place in Daquq district, southern Kirkuk, where in addition to the killing of two militiamen, 11 others were also injured in the attack.

“One of the wounded was a major and revealed that four of their fighters had gone missing,” Rasheed added.

The Iraqi security forces were later dispatched to the scene where clashes were ongoing for awhile, he noted.

The Islamic State has lately conducted several terrorist activities in separate areas in Iraq as the insurgent group is reportedly attempting to reorganize itself in the region.