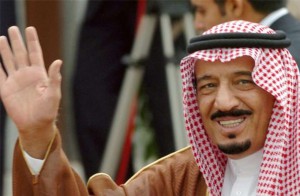 Salman’s call came at a meeting of Gulf monarchs in Riyadh also attended by French President Francois Hollande, who said his country was “by the side” of Gulf nations.

In a clear reference to Iran, Salman spoke of the need to confront an external threat that “aims to expand control and impose its hegemony,” threatening regional stability and creating “sectarian sedition.”

Hollande, the first Western leader to attend a Gulf Cooperation Council summit, said France shared the dangers facing the region and he had come “to affirm the commitment of France to be by your side.”

All but Oman are in the coalition that on March 26 launched airstrikes against the rebels and their allies who have seized large parts of Yemen, including the capital Sanaa.

Concern has mounted over the air campaign, which has continued despite the coalition’s announcement late last month that it was moving to a new phase.

The U.N. says at least 1,200 people have been killed in Yemen since March 19. It has repeatedly warned the already impoverished Arabian Peninsula state faces a major humanitarian crisis. Saudi Arabia has said it is considering temporary halts in airstrikes to allow aid deliveries.

Hollande told the summit France supports coalition efforts “to ensure the stability of Yemen,” and backs Saudi Arabia’s position that talks between Yemen’s political forces must be held in Riyadh.

The Houthis reject such a proposal and Iran, which denies accusations of arming the Houthis, has called for negotiations at a neutral location.

The leaders at the summit welcomed Hadi’s decision to convene on May 17 in Riyadh a congress for “all the Yemeni parties who support the legitimacy, security and stability of Yemen.”

Hollande arrived in Riyadh from Qatar where he attended the signing of a 6.3 billion euro ($7-billion) deal between French aerospace firm Dassault and Qatari defense officials.

Hollande’s visit came as U.S. President Barack Obama prepares to host GCC leaders for talks next week. Most GCC countries are also part of a U.S.-led coalition targeting ISIS in Iraq and Syria.

Security is high in Riyadh after ISIS threats to attack the kingdom, with members of the Royal Guard manning checkpoints, an armored car, and a sniffer dog checking vehicles.

Both Paris and Washington have sought to reassure the Gulf states about an international accord being finalized over Iran’s nuclear program.

Tehran denies trying to develop a nuclear weapon. “I know that Iran is at the heart of your preoccupations,” Hollande told the summit.

In its communiqué the GCC expressed hope that a final accord between Tehran and six major powers, including France and the U.S., would “guarantee the peaceful character of the Iranian nuclear program.”

The only other foreign leader invited to a GCC summit was Iran’s then-President Mahmoud Ahmadinejad, in 2007.