You are here: Home / Analysis / Killing Iran’s Qassem Suleimani changes the game in the Middle East 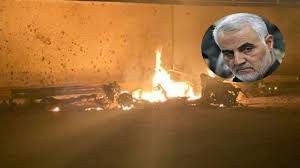 On Thursday night, the Pentagon announced that the United States killed Maj. Gen. Qassem Suleimani, the head of Iran’s paramilitary forces, in an airstrike in Iraq “at the direction of the President”, like reported by vox.com.

The strike that took out Suleimani also reportedly killed the leader of Kataib Hezbollah, an Iranian proxy militia in Iraq that has repeatedly attacked US and allied forces and recently launched rockets at a US military base. Those attacks killed an American contractor, which led the United States to respond and kill 25 operatives in attacks in Iraq and Syria. In separate operations, US forces have also captured and arrested leaders of other important Iraqi militias with close ties to Iran.

The killing of Suleimani, the long-time head of Iran’s Islamic Revolutionary Guard Corps Quds Force (IRGC-QF) is likely to prove a watershed in Washington’s relations with Iraq and Iran and will substantially affect the overall US position in the Middle East. The blowback may be huge, and much depends on how well prepared the United States is for Iran’s response and that of its many proxies in the Middle East.

Based on the Trump administration’s record in the region, there is reason to be worried.

It’s hard to overstate Suleimani’s influence. Because Iran’s conventional forces are weak, Tehran often works through militias, terrorist groups, and other proxies to advance its interests abroad. The IRGC takes the lead for many of these operations. In Iraq, and in other countries where Iran plays both a military and political role — such as Yemen, Lebanon, Syria, Afghanistan, as well as with the Palestinians — the IRGC is often the dominant actor in Iran’s foreign policy, or at least an important voice.

In April, the Trump administration took the unusual step of officially designating the IRGC as a terrorist group even though it is an arm of the Iranian state, and thus not a non-state actor, unlike most of the entities on the US list of terrorist organizations.

Suleimani has been the architect of many of Iran’s most contentious foreign policy issues, and he and the IRGC-QF are responsible for the deaths of many Americans.

The Quds Force, with perhaps between 10,000 and 20,000 fighters in its organization, provides training, weapons, organizational guidance, and other support to a range of pro-Iran groups.

The IRGC, with the Quds Force in the lead, is the key Iranian liaison with the Lebanese Hezbollah, the strongest paramilitary organization in Lebanon — and one that has attacked Israel and the US at Iran’s behest. The Quds Force also works with Palestinian terrorist groups like Hamas and Islamic Jihad, among other nefarious organizations in other countries. When the United States clashed with pro-Iran forces in Iraq, the Quds Force made them far more deadly, providing them after 2005 with sophisticated explosives that could penetrate US armored vehicles, killing almost 200 Americans.

Having been at the helm of the Quds Force since 1998, Suleimani has cultivated a power network in Iran itself and through the IRGC’s many proxies. He is a symbol of Iran’s power, prestige, and reach.

Iran’s response to Suleimani’s killing will be serious, and unpredictable
With Suleimani’s death there will be hell to pay — and because of Quds Force’s reach, Iran will have multiple theaters in which to attack the United States.

Attacks on US forces and facilities in Iraq are particularly likely. Tehran has spent over 15 years building up extensive networks among militia groups and politicians in Iraq. Earlier this week, before Suleimani’s death, Iran was able to rapidly mobilize local proxies to violently demonstrate at the US Embassy in Baghdad, creating a grave security risk to personnel there, even as Tehran’s local allies avoided killing more Americans. Now the gloves are likely to come off.

In the strike that killed Suleimani, the United States also reportedly took out the head of the pro-Iran militia Kataib Hezbollah, Abu Mahdi al-Muhandis, and several other senior pro-Iran figures in Iraq. Kataib Hezbollah was responsible for numerous attacks on US and Iraqi forces, often at Iran’s behest. This, too, will not go unpunished: In addition to wanting to please Iran, pro-Iran militias in Iraq will be angered by al-Muhandis’s death and the arrests of their leaders and eager to avenge them.

Suliemani’s killing is only likely to strengthen Iran’s hand, politically
Many Iraqi politicians, by necessity and in some cases by choice, have close ties to Iran, and pressure will grow to oust US forces from the country. If there is a back-and-forth between the United States and Iran, it is simply the case that Iran has more allies and more influence there, and many Iraqi leaders are likely to bow to Iranian pressure.

US military forces in Afghanistan and Syria are also at risk, though both are already well defended due to threats from ISIS, the Taliban, and other dangerous groups. The IRGC and its proxies may also strike at official US embassies and other government-related targets. In 1983, the Iranian-backed Lebanese Hezbollah blew up the US Embassy in Beirut as well as the Marine barracks there, killing 220 Marines, and dozens of other Americans. Civilians too may be in the crosshairs. Some of Iran’s proxies lack the skill to strike at well-defended official targets, so Tehran may also seek to send a broader message in order to intimidate the United States.

Although Iran is likely to strike back, the scale and scope of its response are hard to predict. Hardliners there will call for making the United States pay for Suleimani’s death. In addition, a conflict with the United States may prove a useful way for the regime to deflect attention from Iran’s declining economy and the massive protests that have rocked the country.

However, Iran has long recognized its military weakness compared to the United States, and its leaders know that it can only lose if there is an all-out confrontation. In the many years of US-Iran confrontations, Iran has provoked Washington with terrorist attacks and by supporting anti-US proxies but also tried to back down when things looked as if they might get out of control. It is not clear, however, if the same script applies after the killing of a key figure like Suleimani.

Is the Trump administration prepared for the consequences of its escalation?
Much depends on how prepared the United States is for the inevitable Iranian response. Deliberative thinking is not a strong suit of the Trump administration, and it is easy to focus on the immediate gratification that comes from killing an archenemy responsible for many American and allied deaths than thinking through the long-term implications of the strike.

What the United States most needs is allies. They are necessary to deter Iran, support further military operations against it if deterrence fails, help guard US facilities, and otherwise share the burden. Unfortunately, the Trump administration has spurned many traditional allies, thumbing its nose at NATO, Australia, and others.

In the Middle East, the administration refused to retaliate after Iran attacked a Saudi oil facility, a traditional red line, sending a message that the Kingdom was on its own for its security. It has also stood by as Qatar, Saudi Arabia, Turkey, and the UAE have worked at cross-purposes in countries like Syria and Libya, rather than trying to create a common position that would increase US influence and bargaining power in conflict with Iran. It is unclear if allies will now rally to Washington’s banner, and even if they do they may not be eager to stand by the United States.

President Trump himself has made no secret of his desire to end the US military presence in the Middle East. “We’re getting out. Let someone else fight over this long blood-stained sand. The job of our military is not to police the world,” he declared.

By killing Suleimani, however, the United States is likely to face a dilemma. It can continue to stay in the Middle East with relatively limited force deployments in Iraq, Syria, and Afghanistan and thus be vulnerable to Iranian attacks. Or the United States can further draw down in the face of an Iranian threat and keep its forces isolated, weakening its influence and handing Iran more power in the region.

The Suleimani killing and the targeting of pro-Iranian figures in Iraq is likely to be a pivotal moment for the United States in the region. How bloody the aftermath will be, and whether the United States can emerge stronger, will depend on whether the Trump administration can be steadfast, plan for the long term, and work closely with allies. Trump’s Middle East policy so far, however, suggests the opposite is more likely. In the end, Suleimani’s death may prove a hollow and short-lived victory.