You are here: Home / West Asia / Killers of the Afghan people safe in Pakistan: Abdullah 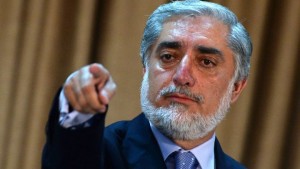 The Chief Executive Office (CEO) Abdullah Abdullah said Monday that the killers of the Afghan people are safely residing in Pakistan.

Addressing the Minister’s Council meeting Abdullah criticized Pakistan’s failure to cooperate with the Afghan government to end the decade-long violence in the country while recalling the commitment by Pakistani Prime Minister Nawas Sharif who called the enemies of Afghanistan their enemy.

He questioned Islamabad’s commitment towards the Afghan government and said the “enemies of Afghanistan and the Afghan people organize sessions in broad day light inside the Pakistani territory.”

Abdullah also added that the government of Afghanistan took all necessary actions too cooperate with Pakistan following the deadly attack in Peshawar and insisted that Kabul expects similar cooperation from Islamabad.

The Afghan delegation was due to meet with the Taliban group representatives for the second round of talks ahead of Mullah Omar’s death announcement.

The first round of peace talks between the Afghan officials and Taliban group representatives was organized in Islamabad, the capital city of Pakistan earlier last month.

The remarks by Abdullah were followed by a spate of deadly attacks carried out by the Taliban group in capital Kabul which left scores of people dead and several others wounded.

Taliban launched their deadly attacks by detonated a truck laden with explosives in a populated area in the early minutes of Friday morning which was followed by two other deadly attacks on the evening of Friday, one targeting the Kabul police academy and other a military of the US special operation forces.