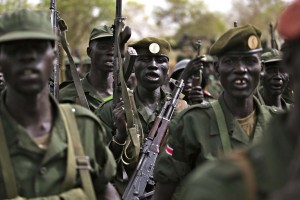 South Sudan government reiterated its commitment to the security agreements signed with Khartoum and announced that the Sudanese armed groups have been advised to quit its territory within 30 days.

“Sudan is ready to deploy joint border monitoring forces, similar to what is done with Chad, to prevent armed opposition groups from crossing into the other side,” said Sudan’s Minister of information and government’s spokesperson Ahmed al-Balal Osman.

In September 2012, Sudan and South Sudan signed a series of agreements, including immediate re-deployment of joint military forces along a Safe Demilitarized Border Zone (SDBZ). Also they approved a plan to stop supporting and harbouring rebels as well as opening crossings points.

However, the signed security deals have not been implemented. In September 2013 the two countries together with the UNSIFA peacekeepers deployed the Joint Border Verification and Monitoring Mission (JBVMM). But on 22 November 2013, Juba stopped the operation. South Sudanese official said they fear the centreline, which passes through the border disputed areas, may be seen as final location of the boundary.

Speaking at a symposium on “the Current Sudanese American Relations”, Osman reiterated Sudan’s interest to have good relations with U.S. saying “The American Administration has repeatedly promised to normalize relation with Sudan without honouring these pledges”.

“There are great opportunities for the two countries to cooperate on oil and minerals,” he said before to welcome Washington pledges to put pressure on the Sudanese armed groups to join national dialogue.

The minister went to say that Sudan expects U.S to review its stances towards Sudan in the light of the development in Middle East and the affects of the conflict in Syria, Iraq and Yemen on the area.

“Now there is no rebellion in Darfur and Sudan is entering a new era after the national dialogue and the U.S administration needs to understand that,” stressed the minister.

Sudan has been under US economic sanctions since 1997 and remains on the US list of state sponsors of terror.

Washington eased the sanctions imposed on agriculture equipment and services, and allowed exports of personal communications hardware and software. Also, the US Treasury Department removed the private Bank of Khartoum from a blacklist of Sudanese entities.