You are here: Home / MidEastGulf / Khamenei urges Islamic unity against real enemies: US and Israel 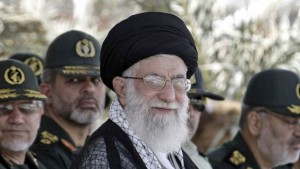 Iran’s supreme leader claimed Saturday that Islamic nations were being manipulated into internal strife by the world’s “bullies” and urged Islamic unity in the face of what he identified as the Umma’s two greatest enemies: the US and Israel.

Ayatollah Ali Khamenei said the US had long sought to incite “third-party” states against Iran but “such third parties are only deceived puppets,” the Islamic republic’s Fars news agency reported.

“The root cause of the problems returns to their real enemies, the US and Israel,” he said.

The bullying powers, as he called them, are conspiring “against the Quran and not Shiism and Iran, because they know that the Quran and Islam are the center of awakening nations.”

Iranians, he said, “have realized that their real stubborn enemy is the world arrogance and Zionism and that’s why they chant slogans against the US and Zionism.”

Khamenei was speaking to Iranian officials in charge of the Hajj — the annual pilgrimage to Mecca that Muslims from all over the world undertake.

He explained to them that the pilgrimage to Mecca was a prime opportunity for Iranians to convey their aforementioned insights to other Muslims and thus encourage Islamic unity against its true enemies.

“The world bullies are fully, seriously seeking to stir violence and discord under the name of Islam and are trying to disrepute the religion of Islam, foment internal fights among Islamic nations and even among the people of one nation to weaken the Muslim Ummah, and transferring the Iranian nation’s experience about unity and recognition of the enemy to other nations in the Hajj season can defuse these plots,” he said.

Since the signing of the nuclear deal between Iran and world powers in July, Khamenei has repeatedly spoken out against Tehran’s main negotiating partners in Washington.

Earlier this week he strongly impugned the motives of the US in the talks, saying “their intention was to find a way to penetrate into the country.

Khamenei, who has final say on all state matters in Iran, has not publicly approved or disapproved the deal, though he repeatedly offered words of support for Iran’s nuclear negotiators during the course of the talks.

Last Saturday a prominent Iranian hard-liner, journalist Hossein Shariatmadari, said he believed Khamenei was in fact opposed to the accord. However, an editorial appearing Sunday in the Tasnim news agency, thought closely tied to the Iranian regime, derided Shariatmadari for claiming to speak for Khamenei.