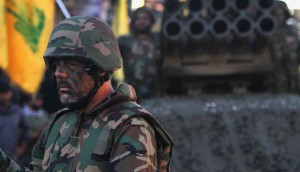 The Lebanese Shiite militant party Hezbollah said a “prominent leader” of the Islamic State (IS) was killed on Tuesday in the Qalamoun region adjacent to the country’s eastern border with Syria.

The party’s al-Manar TV said that “Saudi national Walid Abdel Mohsen al-Omari was killed by Hezbollah fire when the party’s long range artillery shelled a jihadist post in the Shobat al-Mahbas region on the outskirts of Ras Baalbeck town.”

It added that “the post was destroyed and several jihadists were killed in the shelling including al-Omari.”

The TV station said that Hezbollah Tuesday repelled an attack by IS gunmen on the outskirts of al-Qaa and Ras Baalbek towns near Syria’s border.

It added that IS gunmen targeted several Hezbollah posts during the attack, but the party’s fighters doled out several casualties to the ranks of the Islamist group, destroying around 10 vehicles.

Hezbollah has recently won against al-Qaida linked al-Nusra Front in the area, compelling fighters to retreat from their positions.